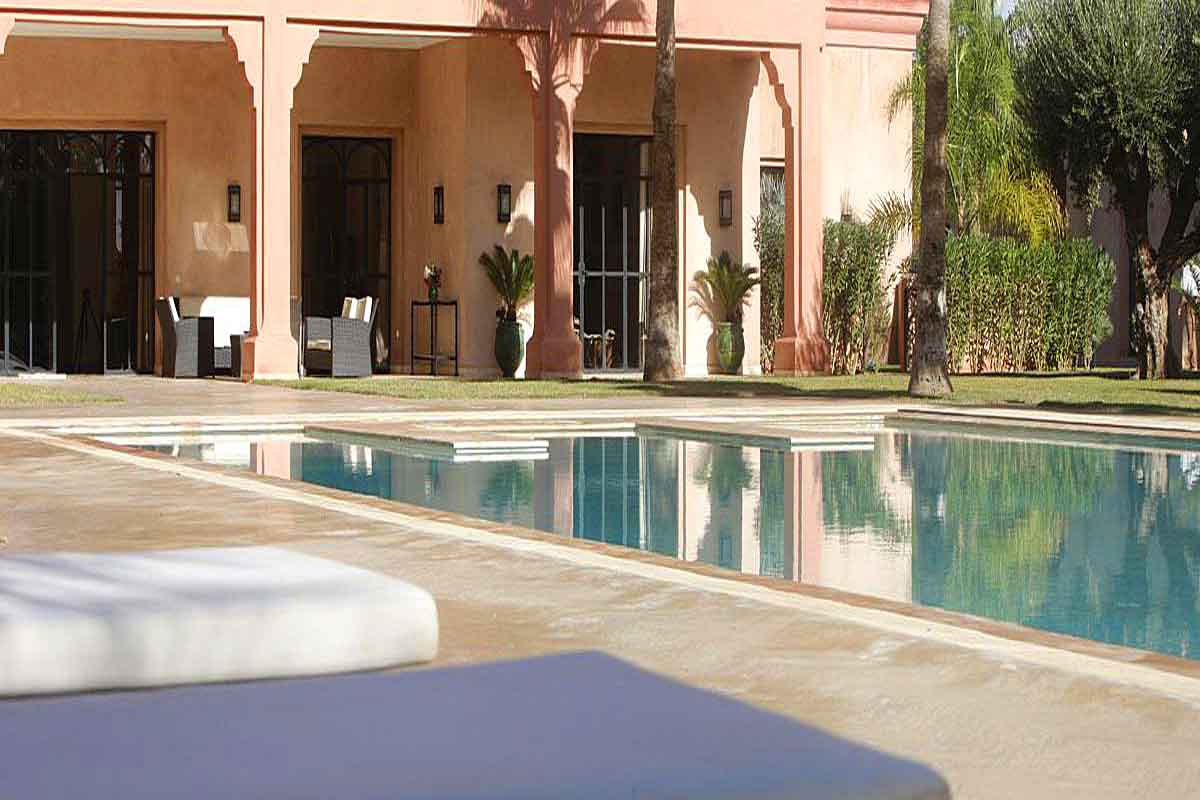 The villa and pool 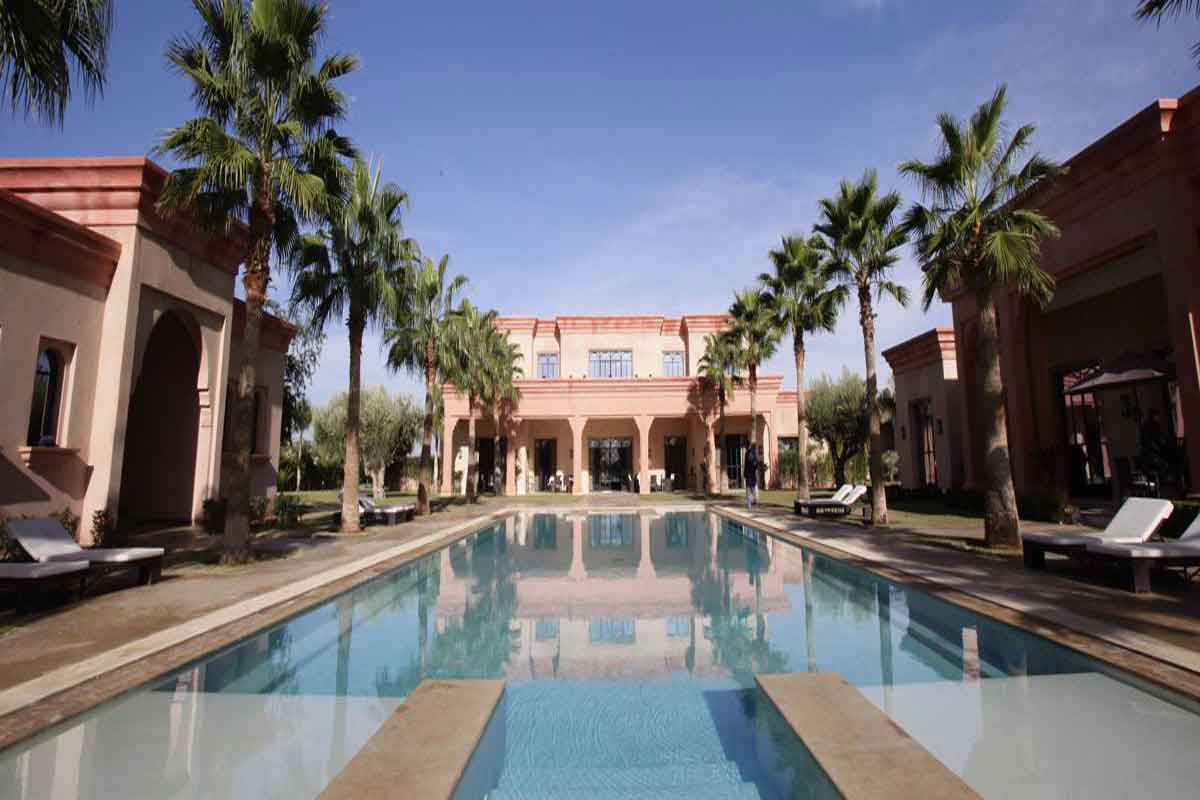 Amazing views from the villa 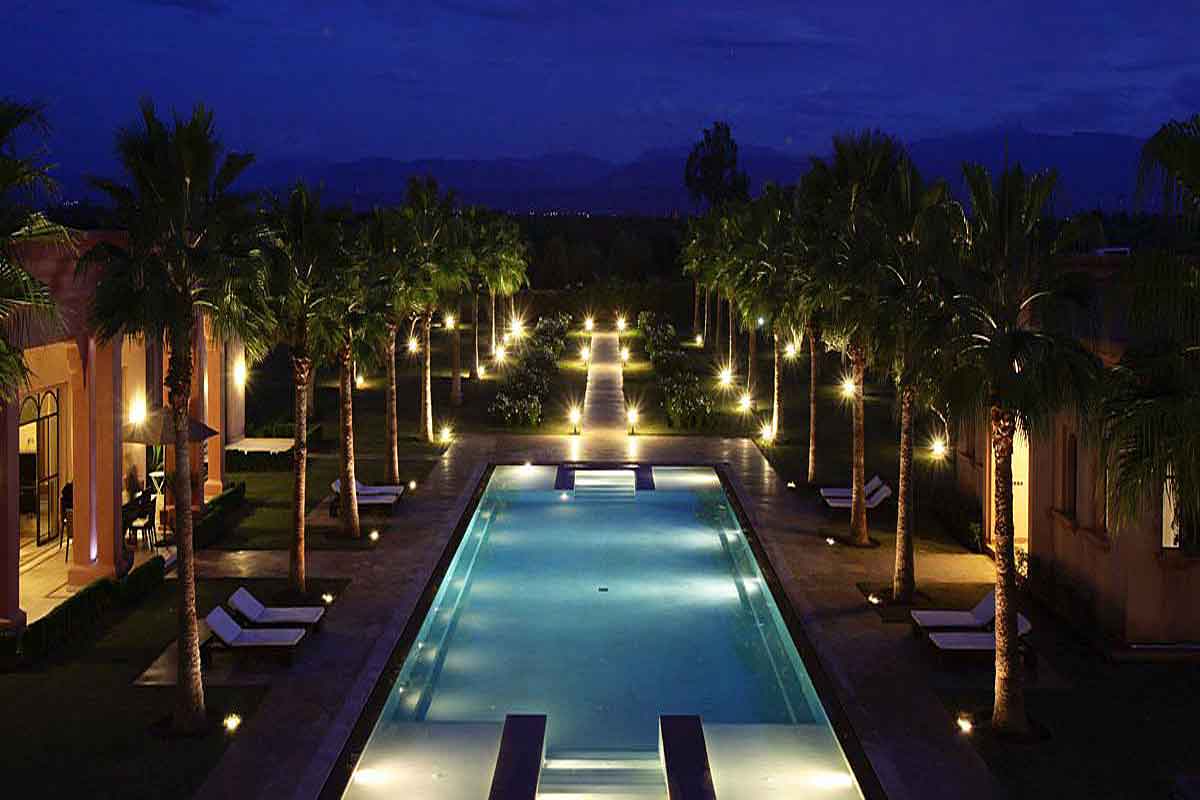 Such a pretty setting at night 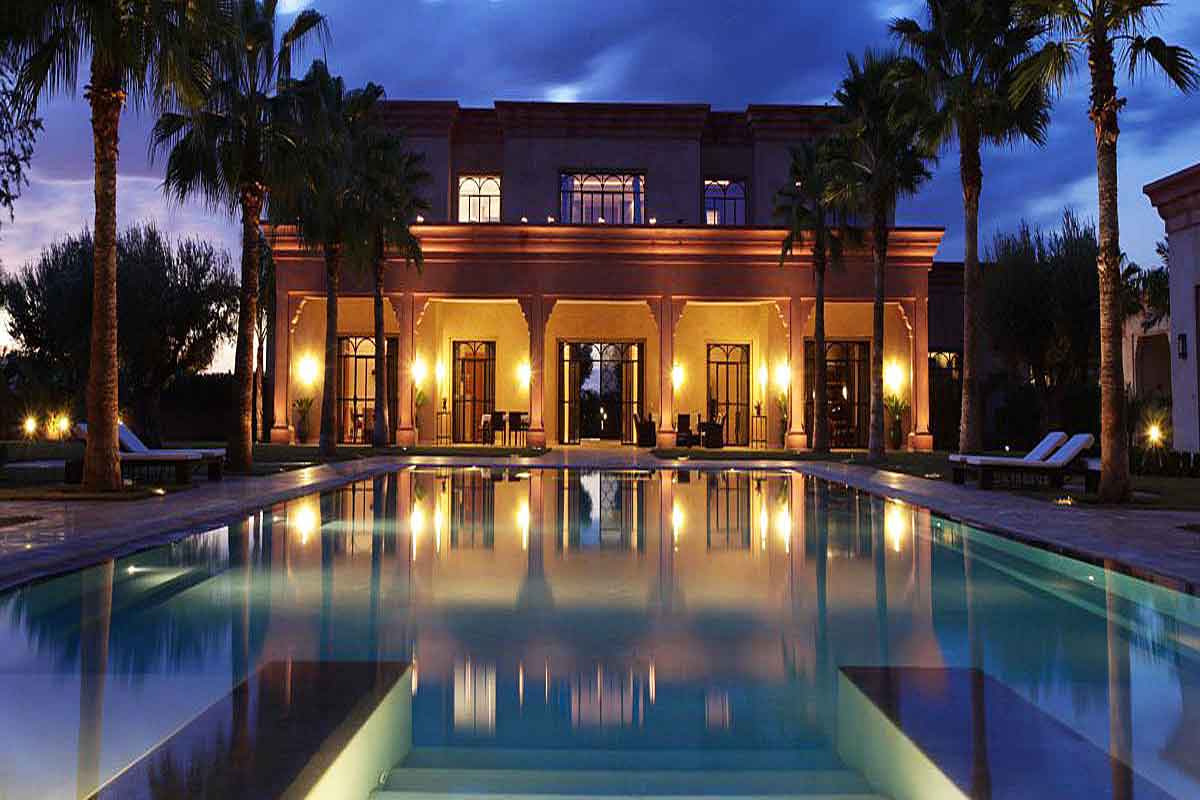 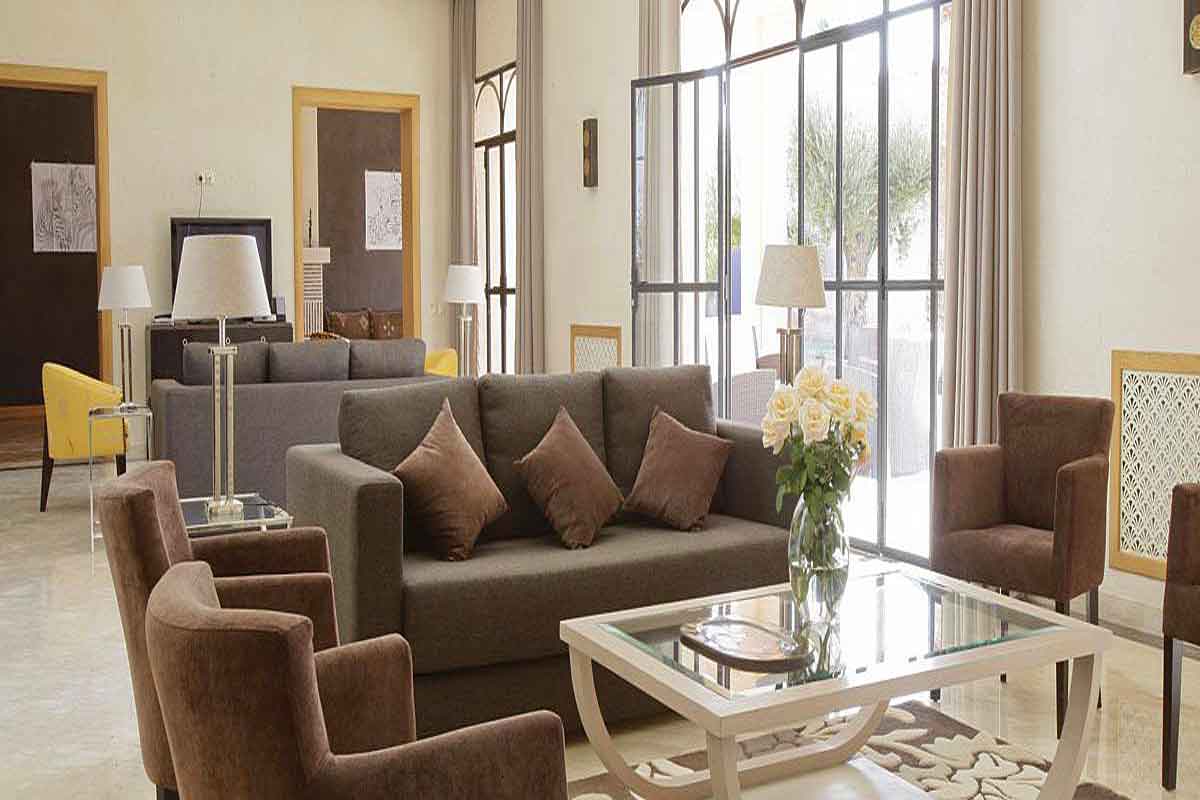 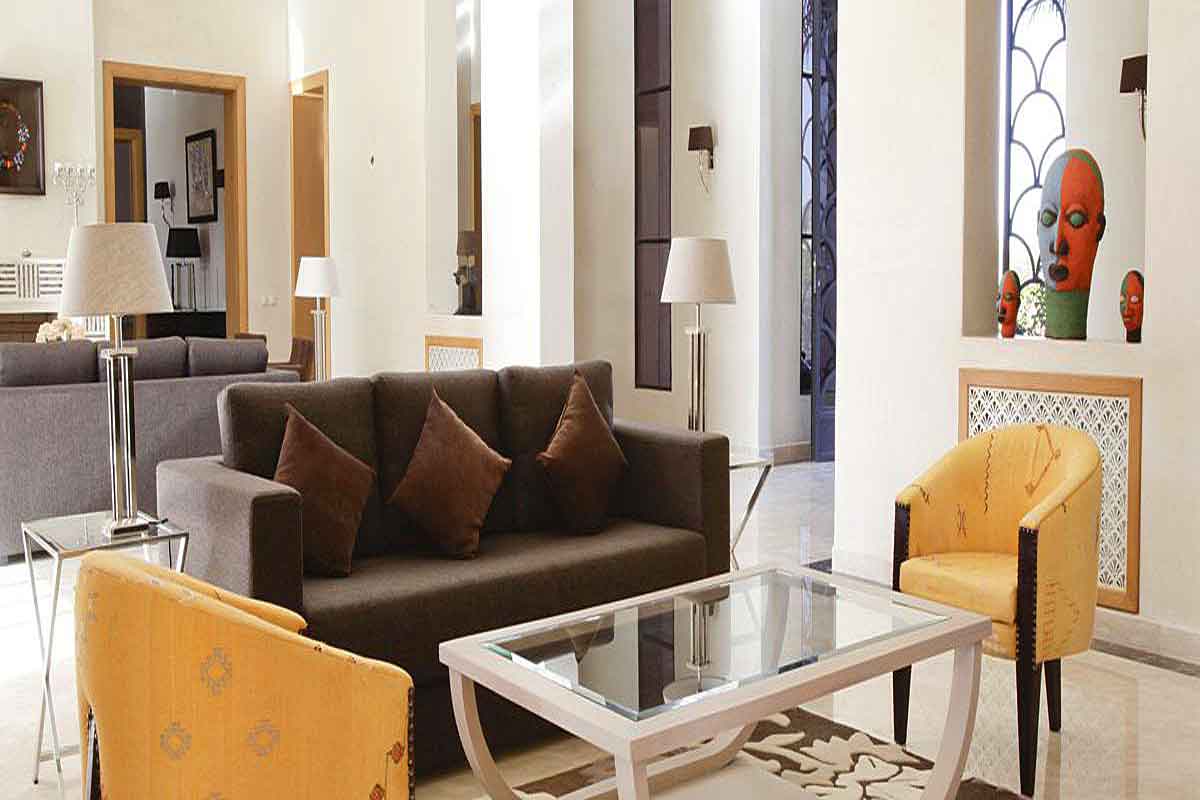 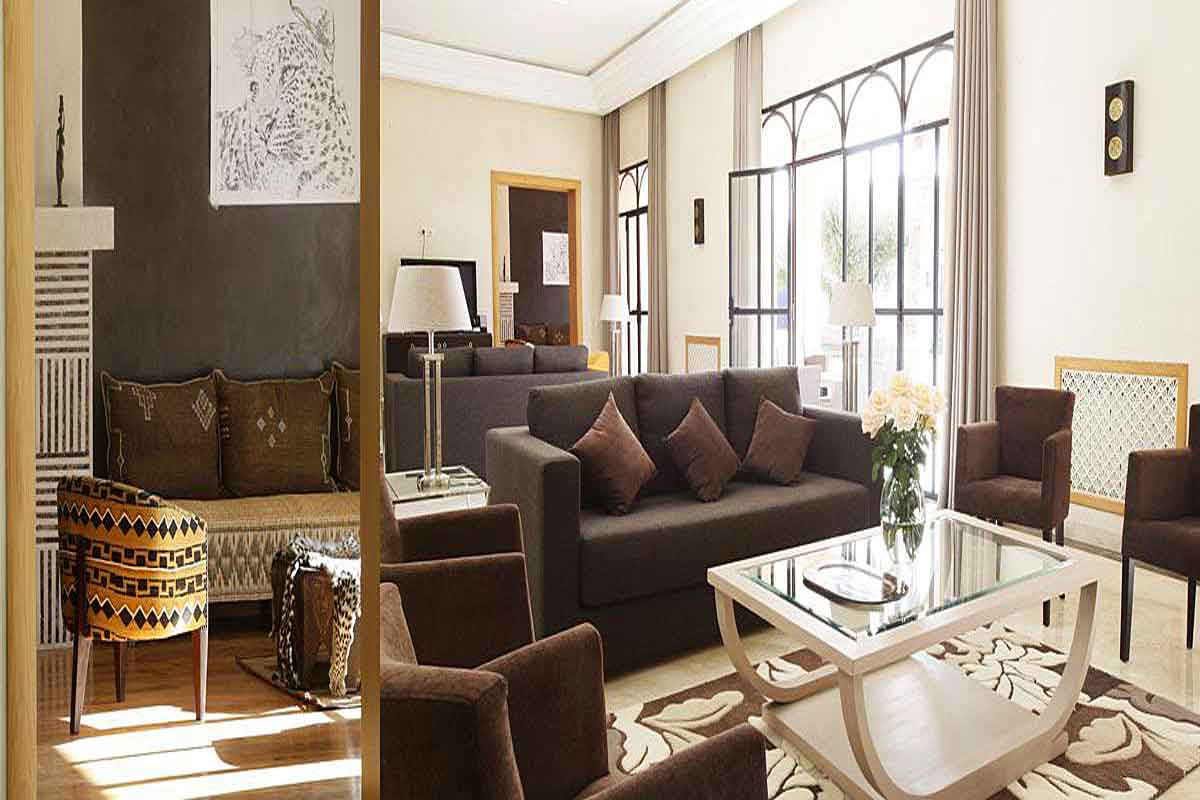 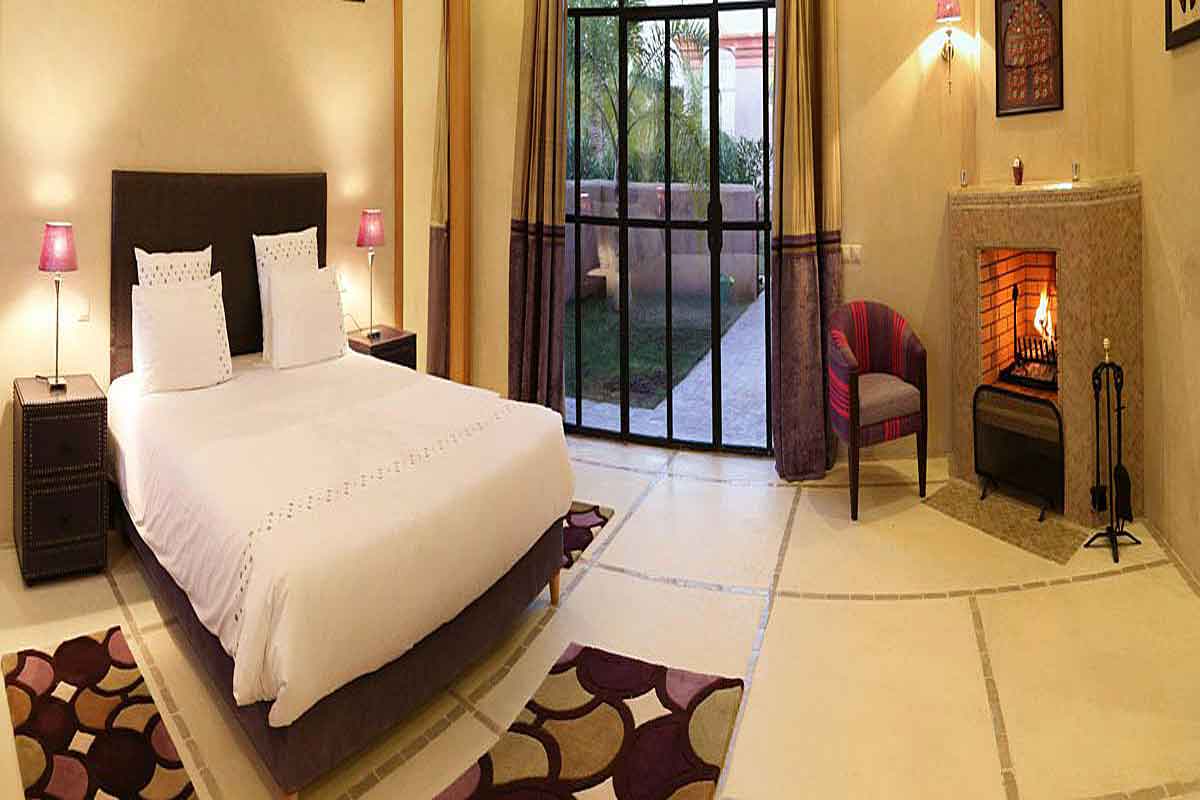 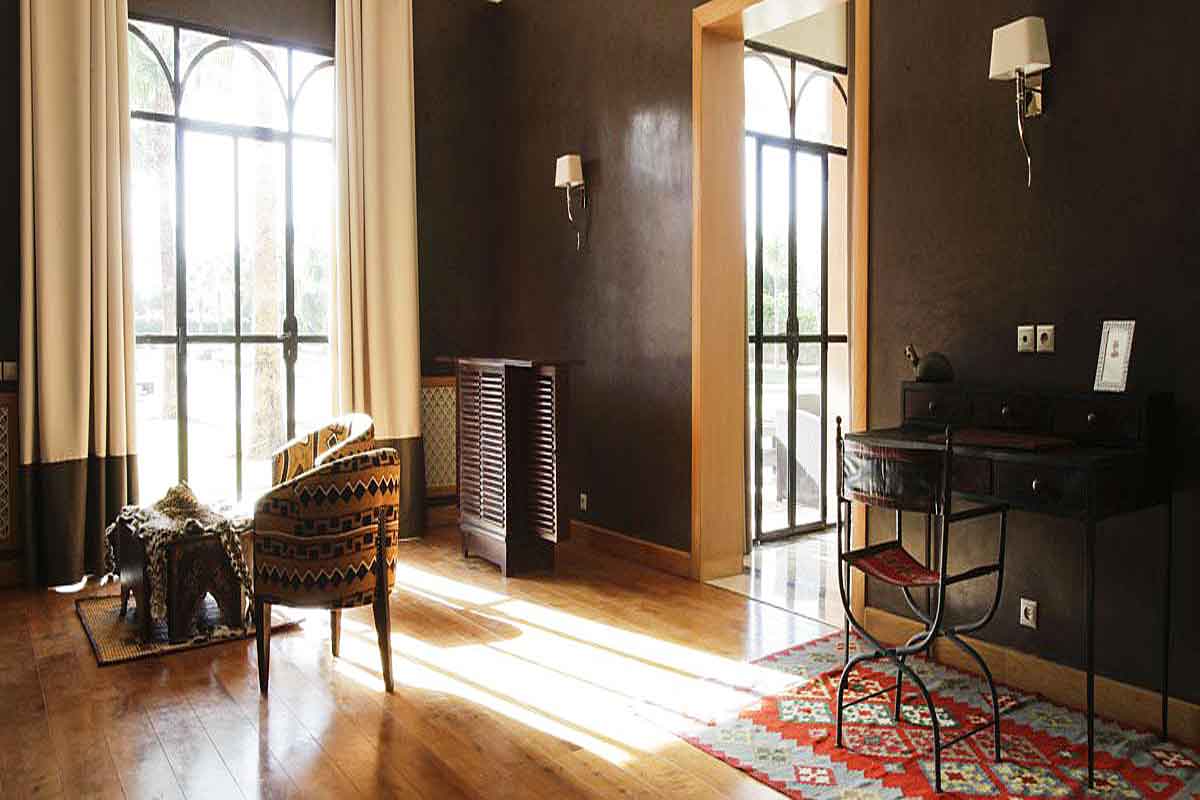 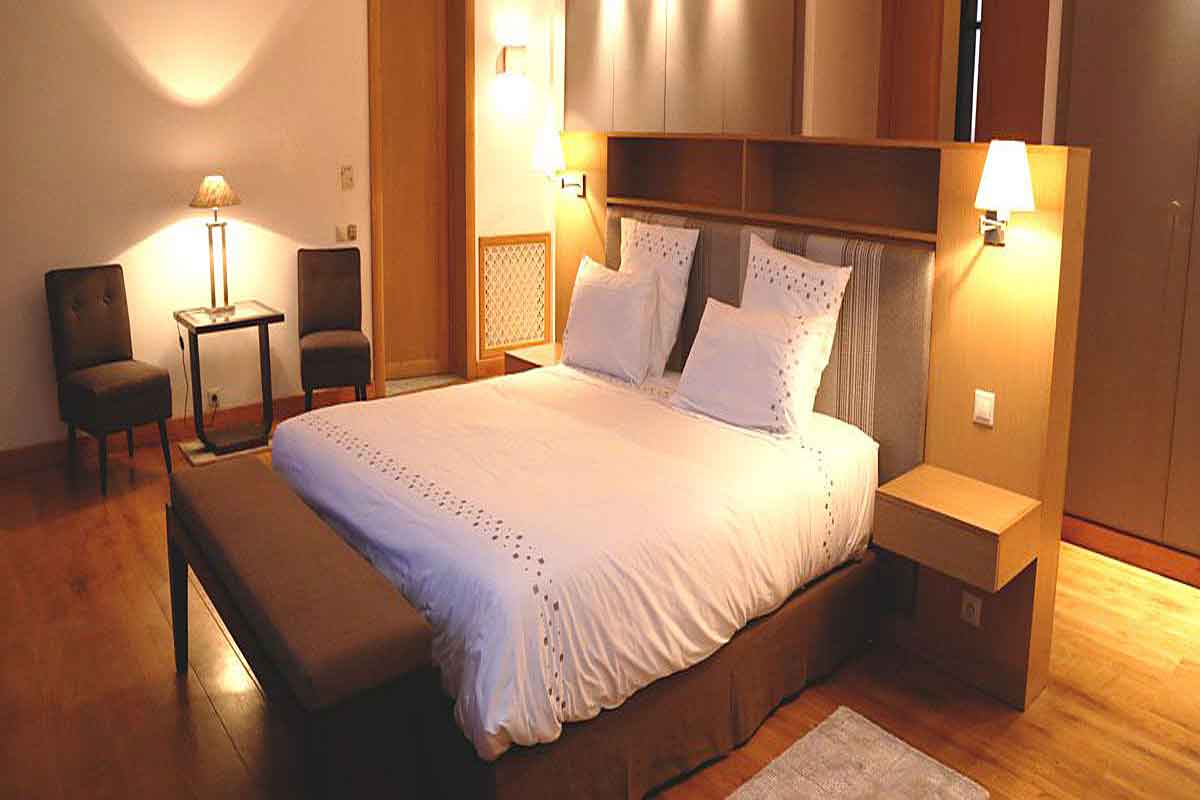 Sunloungers by the pool 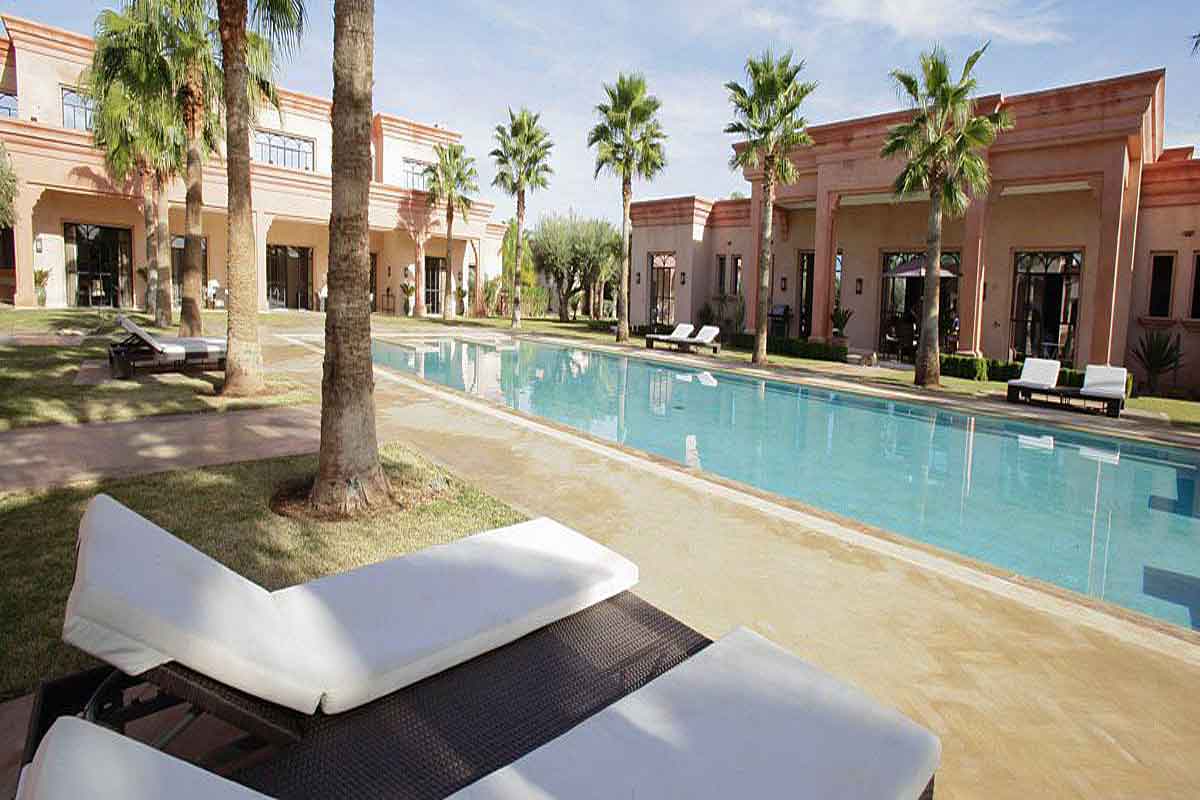 Both sides of the terrace 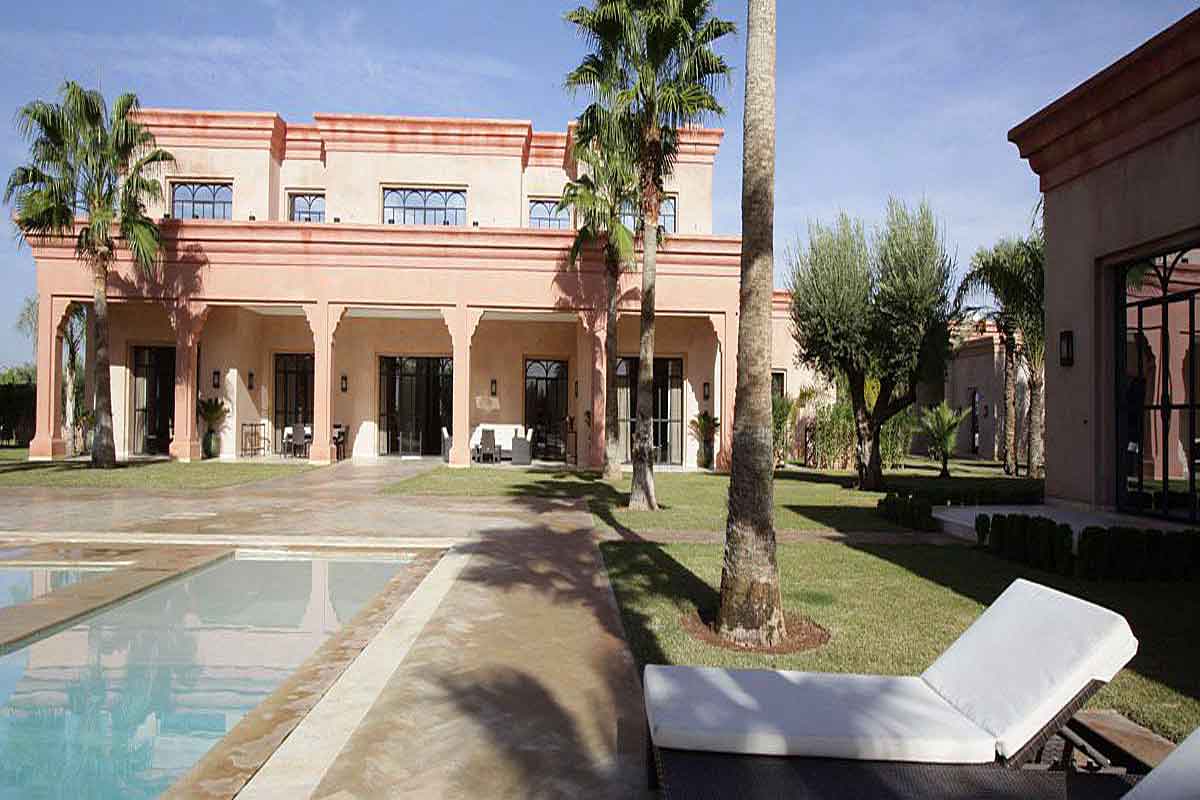 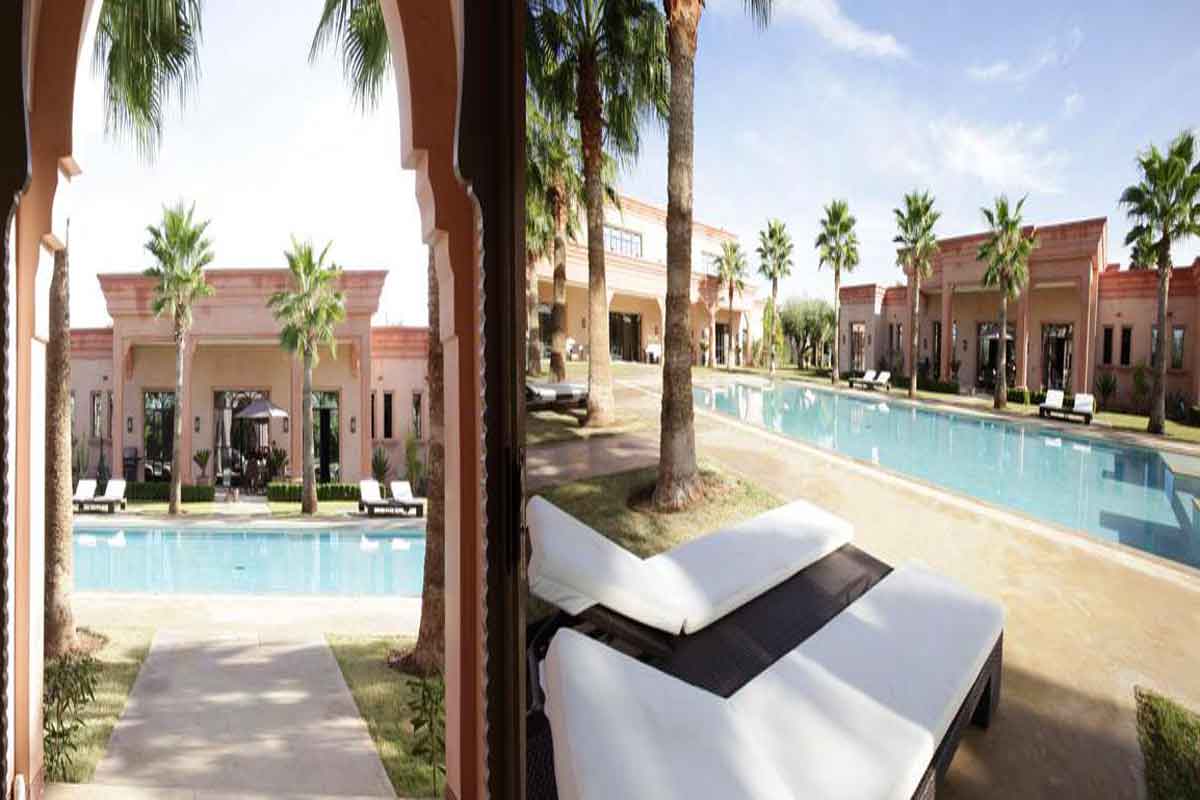 Pool and villa at night 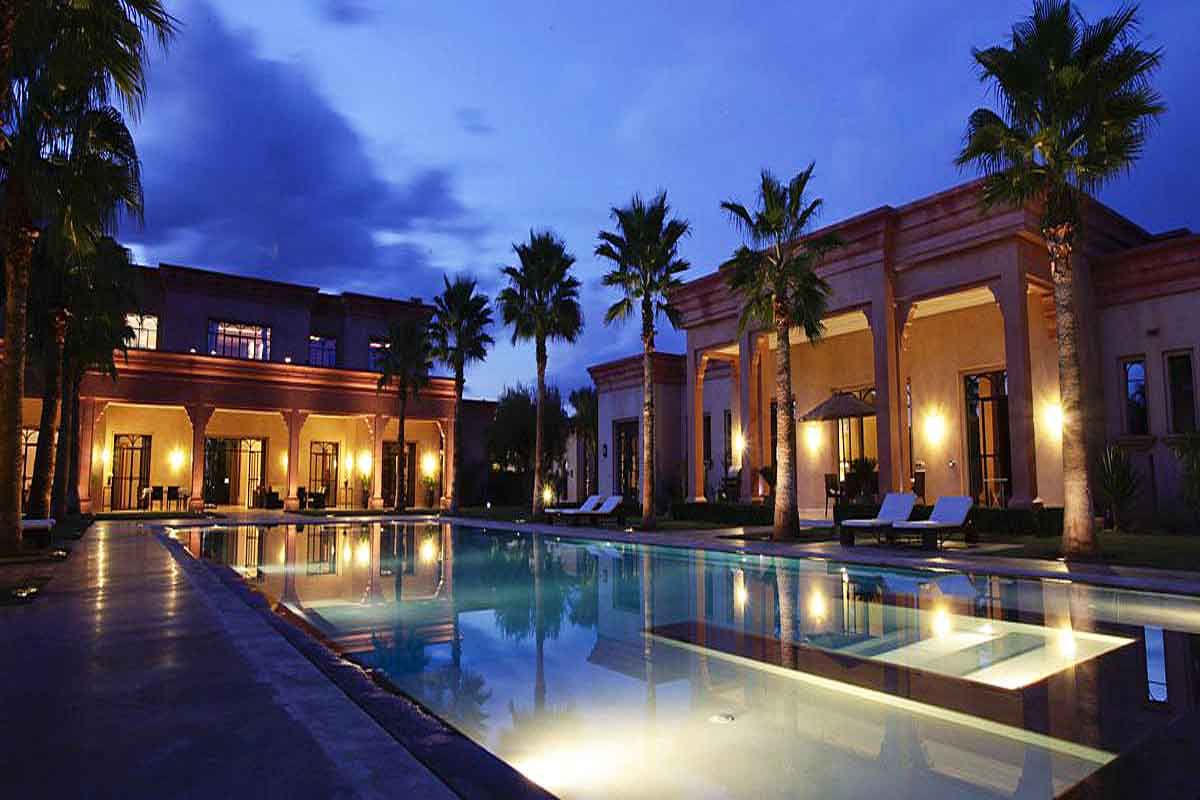 This villa is an architectural masterpiece, designed by Anne-Marie Chaoui.

Situated in a private Estate this spacious villa offers apprx 1500m2 of living space and is peacefully located on the Route de Fès apprx 12km from the outskirts of Marrakech. The bedrooms are particularly beautiful.

The private beautifully wooded park of more than one hectare (10000m2) has mature trees and plants maintaining the perfect balance between the green park and the modernism of the villa's construction.

The spacious 1100m2 villa is laid out around the beautiful pool, set in a wooded park of more than 1 hectare.

8 ensuite bedrooms, including 3 Suites, are located in two separate buildings around the pool area - 4 bedrooms in each.

A large open plan living/dining area has huge windows that lead out on to the terrace - the ultimate in inside-outside living. Contemporary design and furnishings complement the light and airy feel.

Kitchen - The villa is not a self-catering property, the kitchen is for the onsite chef only, you can choose from an all-inclusive or half board option (no alcohol included).

There is a fully integrated private Spa with Jacuzzi and Hammam at the property, together with a Massage room - all these facilities can be provided for the guests at an extra charge.

This villa is set in 10000m2 of private beautifully wooded park with a pool, which can be heated (optional extra).

There are sun loungers around the pool and stunning views from the terraces.

For the more energetic amongst you there is fitness equipment and a table tennis table.

The Place Jemaa el-Fna Marrakech is always a little bit of everything: djellabas and babouches, bright colours, energy, heat. Once you've wandered around the stalls, gorged on all the mouthwatering food and watched everything on the square it's time to retreat to one of the many cafes and watch the goings-on from a distance. In terms of views, though not of food, the best are the rooftop cafes. From here you can see the entire square of Jemaa el-Fna: the smoky and brightly lit food stalls are the centre, but circles of locals form all around the square watching storytellers and actors, and around the edges are the juice stalls selling fresh orange juice.

Markets with bakers and grocers, cafes, pharmacies, restaurants and all manner of shops and of course the famous "Souks" are all available in and around the Medina.