Languedoc (Occitanie), South of France Travel Guide - What to do on a villa holiday in Languedoc Roussillon

From your Languedoc (Occitanie) holiday villa rental you can explore this magical South of France region so full of history, colour and contrast - this is a guide to activities and sites when you rent one of our Holiday Villas in Languedoc 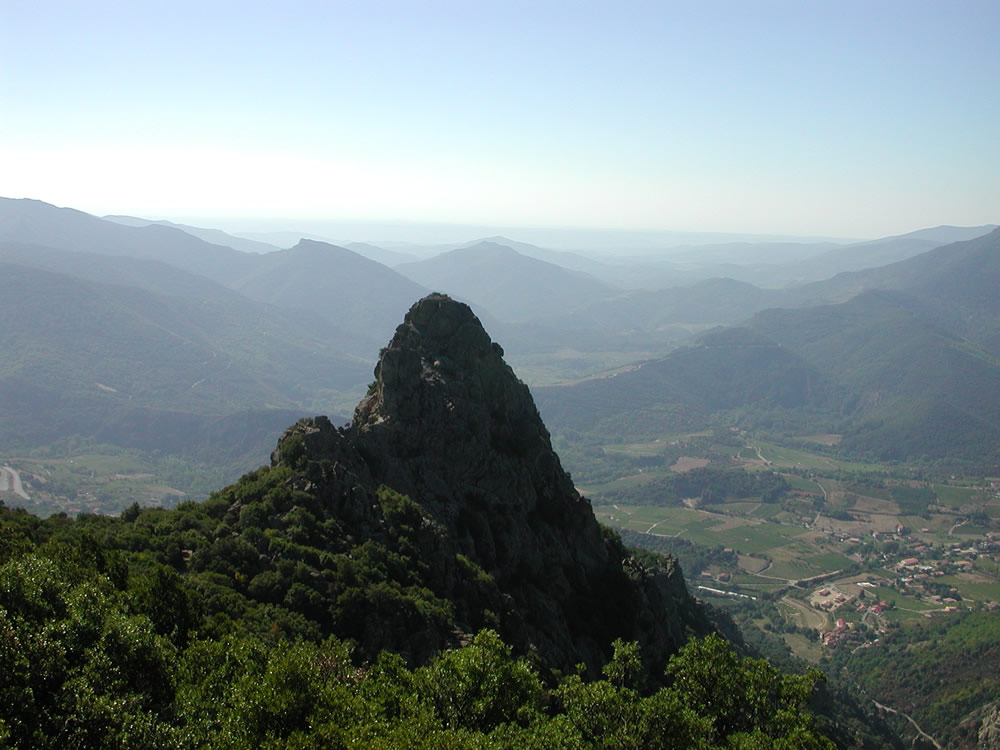 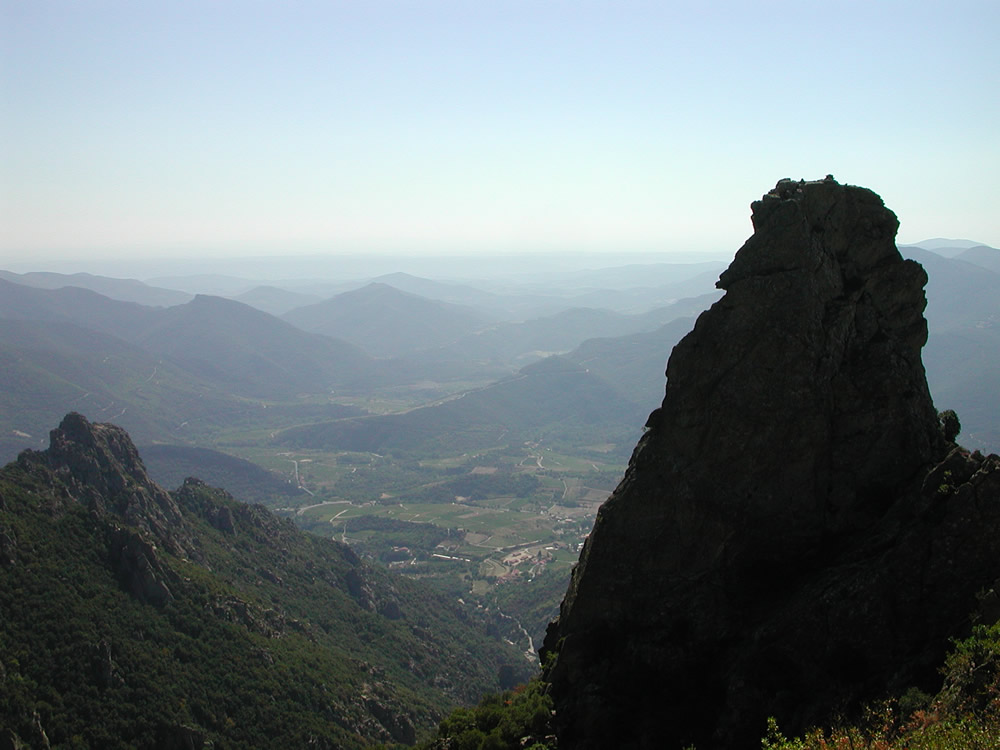 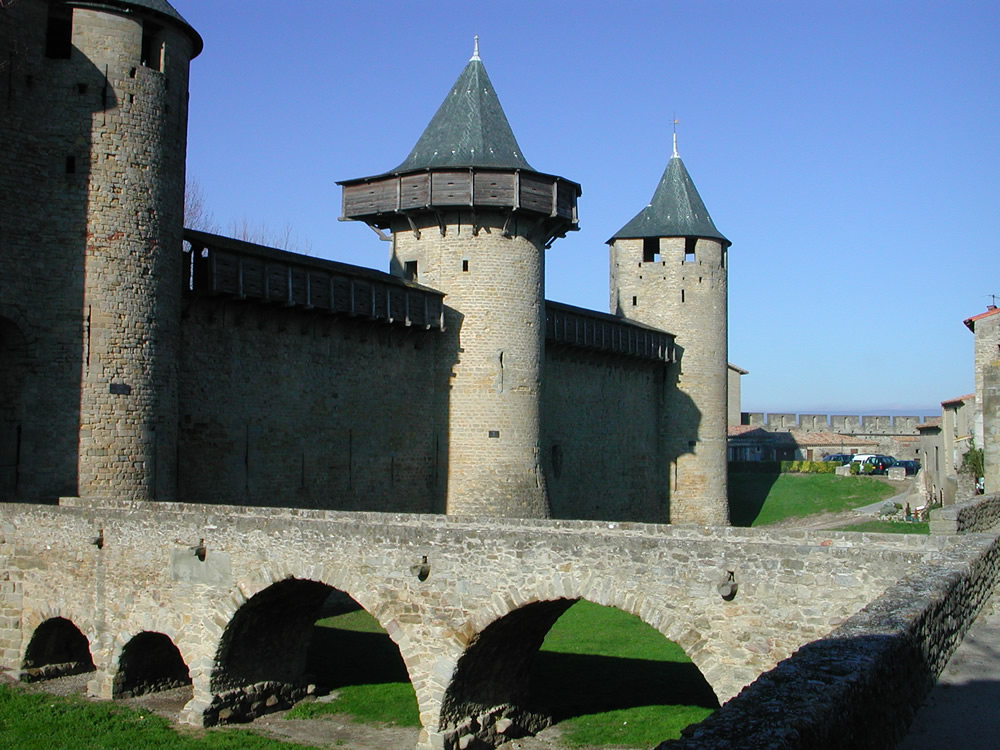 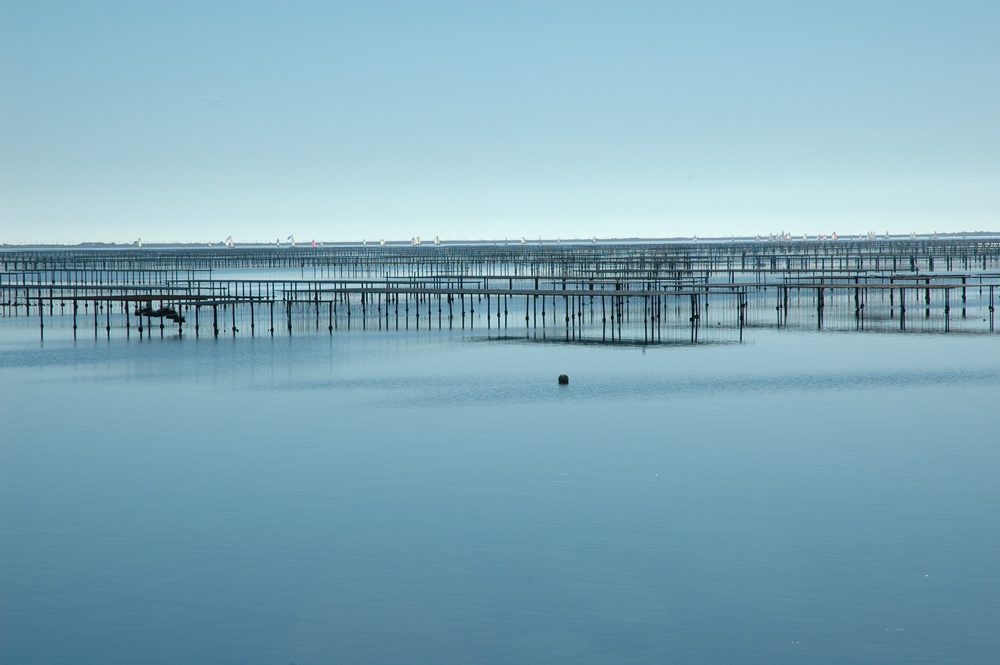 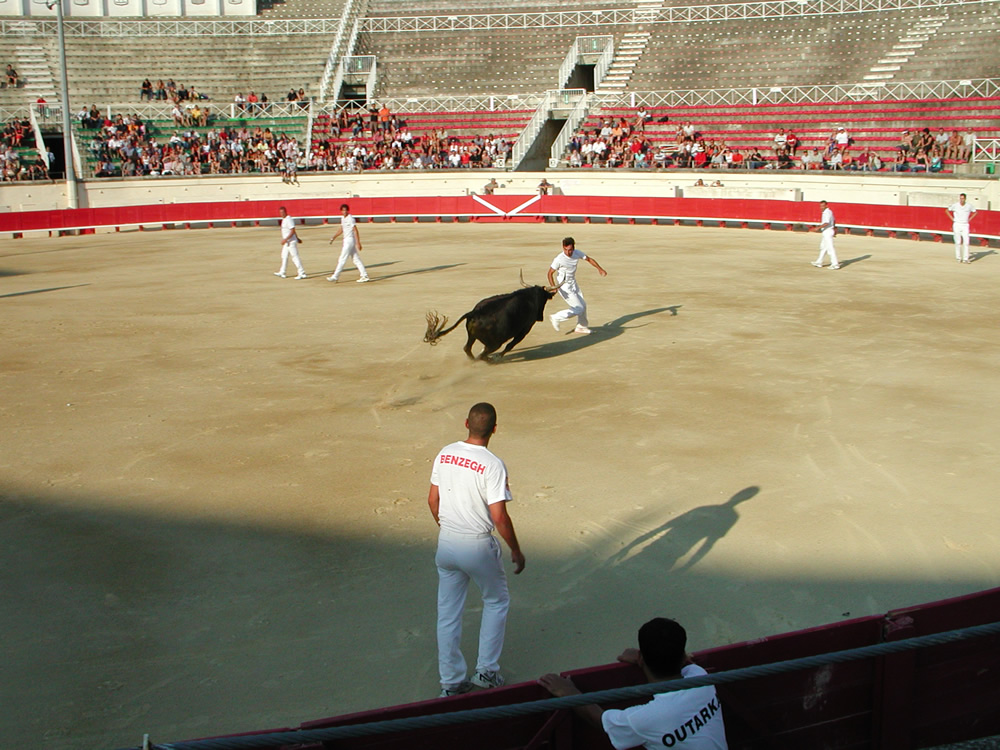 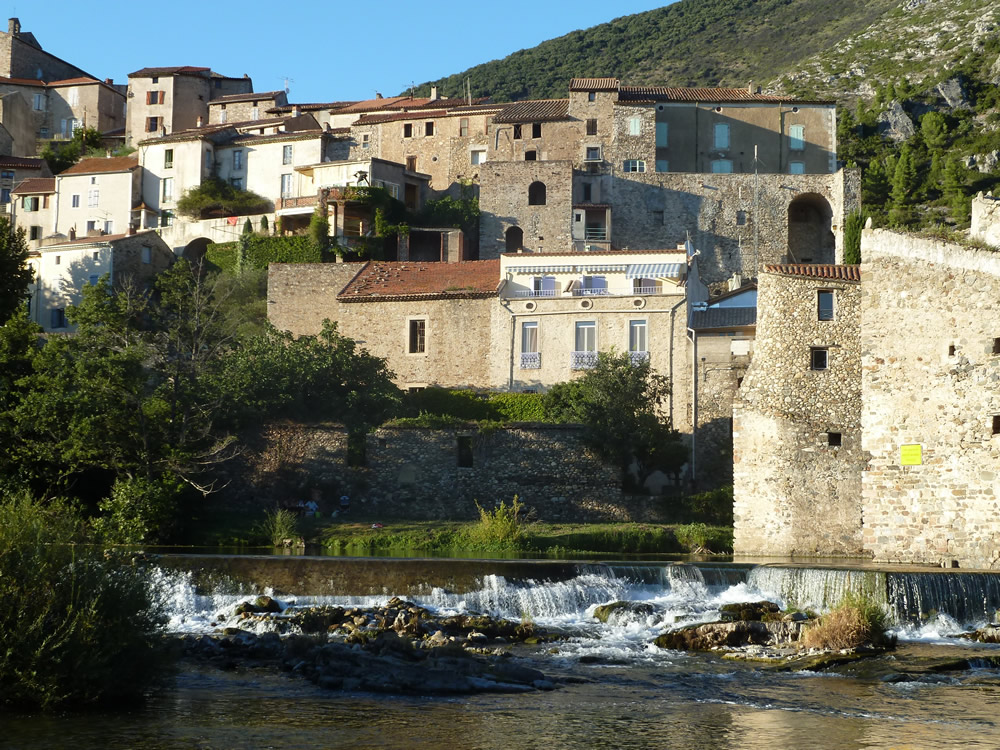 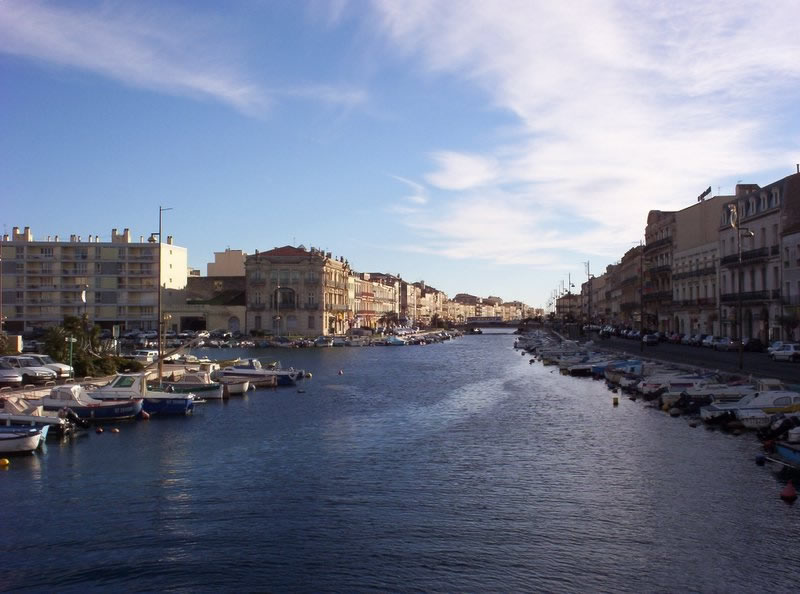 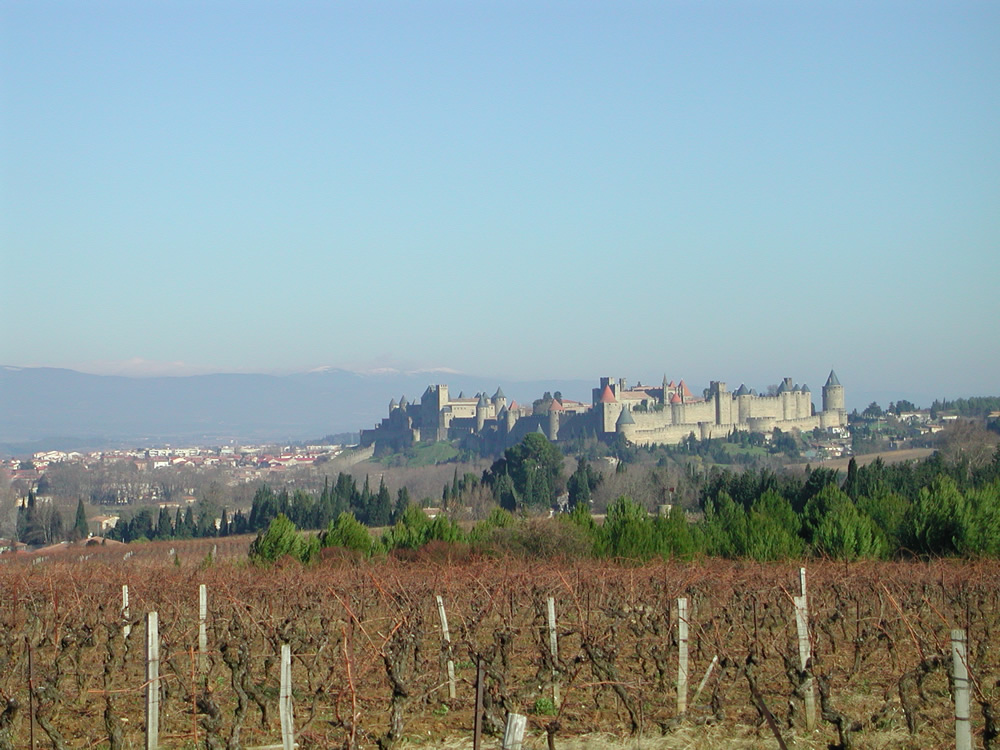 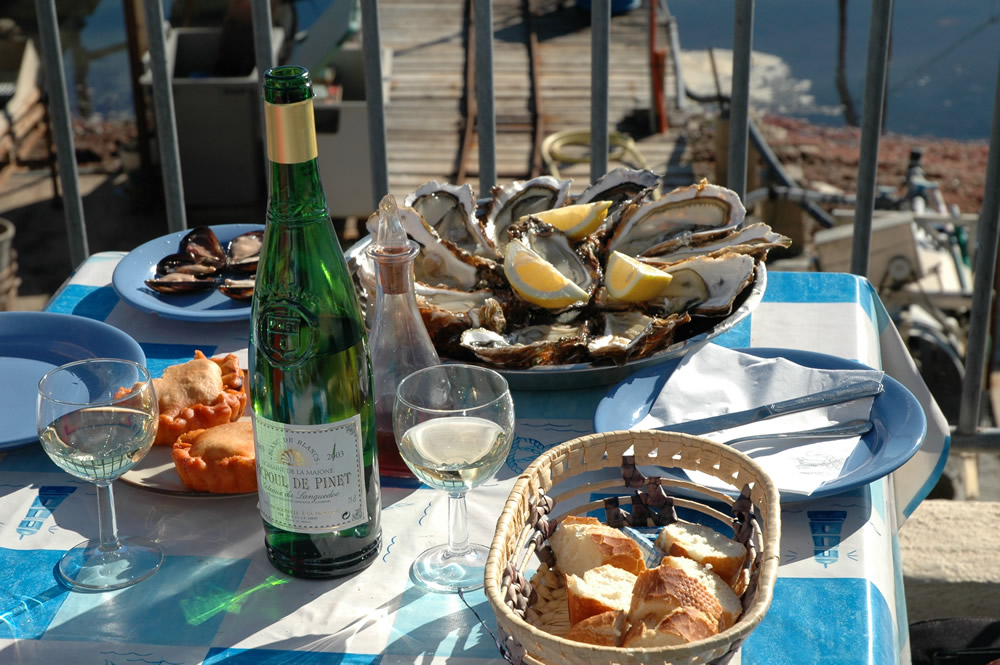 Click on a picture to enlarge, then use the left/right arrow keys to browse
Scroll down to read more about the Languedoc-Roussillon

Languedoc Roussillon or Occitanie as it is offically now known, the 'alternative' South of France, stretches along the Mediterranean coast from the Camargue to the Spanish border. The Languedoc/Occitanie region boasts over 200km of sandy beaches sloping gently into the water therefore ideal for families on holiday in the South of France. The coastline is studded with modern marina resorts and old picturesque ports such as Sète with its maze of canals, or Collioure the pretty harbour town where Matisse and Picasso painted.

Although there is a wealth of tourist facilities, including villas and apartments to rent, the Languedoc, Occitanie region remains less crowded than the Côte d'Azur area of the South of France. Inland from the coast is an undulating plain of vineyards and olive groves, then hills with chestnut, pine and oak forests, lakes, gorges with rock pools and spectacular underground caverns. The Languedoc Roussillon area of  Southern France is famous for its annual 300 days of Sunshine and embracing the French “Arte de Vivre”.

With the many low-cost airlines flying to the  regional airports, it is now easier than ever to get to our Languedoc Villa Rentals, especially in the Pezenas, Bèziers, Carcassonne, Montpellier or Perpignan areas of Languedoc.

The Occitanie region is vast and varied so there is sure to be a holiday destination to please everyone’s tastes. From stunning architecture to beautiful natural wonders, from vineyards & wine tasting to beautiful Mediterranean beaches. Rent one of our fantastic holiday villas in Languedoc Occitanie and explore the region for yourself!

The Main Towns of Occitanie are:

One of France's fastest-growing cities it has changed dramatically from a sleepy old wine town to a trendy modern metropolis. It is elegant and classical rather like a Paris in the South of France, the main focus point of the city is the Place de la Comédie along with the Opera Comédie. Other sights to see include the Musée Fabre, the Porte du Peyrou, the Jardin des plantes which is the oldest botanical garden in France founded in 1593, and the medieval Tour des Pins and Tour de la Babotte. Montpellier, Languedoc is also a thriving university town so the atmosphere there is young and lively with plenty of cafés and bars. The beaches are not too far from the City, making Montpellier an ideal vacation spot in the Languedoc-Occitanie region of France.

Sète
With its picturesque canals, Sete brings a touch of Venice to the Languedoc, and is one of the most lively and pleasing towns in the region. The port is famous for its nautical jousts: young men dressed in white stand on platforms fixed to large rowing boats and each team tries to knock the other into the water. Sete is built on the south eastern side of the Bassin de Thau, A prosperous fishing town it is a great place to visit to try some local fruit de mer.  South France Villas have amazing luxury beachside villas to rent in Sete.

Pézenas
An attractive market town with a warren of medieval cobbled streets, local artisan shops and a fine renaissance quarter. Pézenas is famous for its links to Molière (France's answer to Shakespeare) who in the 17th Century came to Pézenas with his theatre company to put on plays and entertain the members of the court that would take their holidays in the Languedoc. The town has recently seen an increased amount of Gourmet restaurants opening. The local delicacy in Pézenas is a small sweet/pie that is shaped like a tower/cotton reel and is called a Petit Pâté. The Saturday morning market and the nocturnal shopping are not to be missed. We have rental villas within walking distance of Pézenas, Pézenas- Villa-Ava was featured in the Sunday Times!

Béziers
A busy colourful market town, the principal centre of the Languedoc wine trade. The lively Feria in August has bull-fighting, paellas, flamenco dancing, and partying in the streets until the early hours. Go and see the beautiful Gothic architecture of the Saint-Nazaire Cathedral which dates back to the 14th Century. Also worth a visit are the winding streets of the Old City, the Jardin du Plateau des Poetes , Musée des Beaux Arts, Les neuf ecluses (nine locks) on the Canal du midi now classed as a UNESCO World heritage site. Recent years have seen an increase in the number of private beach bars in Languedoc, where you can rent a sunbed and enjoy waiter service! Check out our Vacation Rentals near Beziers

Narbonne
The Roman capital of Gaul. Its' 13th century cathedral is one of the tallest Gothic buildings in France. Its cloister leads to another mighty edifice, the fortified Palace of the Archbishops. The Musée d'Art et d'Histoire is situated in the new palace and hosts thematic art exhibitions and installations. The city used to be a prosperous Roman port but now lies 15km inland due to the silting up of the navigational channels of the Aude River.  The stunning cathedral is a huge beautiful Languedoc landmark, and is still one of the tallest in France, it was was originally planned to be much larger but was never finished! The Halles - a bustling, covered market in the centre of the city is the perfect place to get fresh local produce and an interesting place to visit and soak up the vibrant French market atmosphere. there is an excellent choice of restaurants and bars dotted along the local beaches, like Leucate and Narbonne Plage. We have a wide range of Holiday Rentals around Narbonne.

Carcassonne
Has the largest fortified Citadel in Western Europe. The languedoc town is divided into two areas, the fortified Cité de Carcassonne - a big tourist attraction with its medieval walls and barbicans and cafés, restaurants and shops within it and the larger lower city that was built out around the Cité.   It has seen more than its fair share of battles: Simon de Montfort, the Cathars, and later the Dukes of Toulouse all fought for control of this stronghold. The so-called "new town" of Carcassonne, much of it 17th and 18th century, also has an old-world charm. Also worth a visit are the Pont Vieux and the banks of the Aude, within the lower town, which is a great spot for a picnic. The bridge dates from the fourteenth century and boasts a Gothic chapel at its western end dating from 1538. Ryanair have daily flights in the Carcassonne airport, making our Holiday Villas near Carcassonne easily accessable.

Nîmes
Famous for one of the best preserved classical arenas, in Languedoc the Romans used it for gladiatorial combats and chariot races, while today's programme includes bullfights, tennis and opera. The Maison Carrée is a temple built in 20BC is regarded as one of the most graceful and finely proportioned of all extant Roman temples. Also worth a visit are the beautiful Jardins de la Fontaine, they were the first European public gardens, created in 1750 and were built around the ruins of ancient Roman baths. There are some other beautiful monuments to visit in Nimes such as the Roman amphitheatre which is still used today, the Cathedral and the Musée des Beaux Arts. Holidays in Nimes are now much easier with regular flights from the UK direct to the tiny Nimes airport. Check out our villas close to Nimes and the charismatic town of Uzès.

Other Places to Visit in and near to Languedoc Occitanie, South of France

Pont du Gard
This marvellous three-tier Roman Bridge was built in 19BC as part of the aqueduct carrying water to Nîmes.

Uzès
In the heart of this lovely distinguished little town stands a massive feudal castle, home of the Dukes of Uzes. Uzes has some of the Languedoc's finest boutiques so it is a great place to go and do some shopping. The town is filled with beautiful architecture including the beautiful castle Le Duché.

Roquebrun
A beautiful little town built on the steep sloping banks of the Orb river. This is the perfect place for renting a canoe and taking a trip down the river.

Aigues-Mortes
This small medieval walled town stands 5km inland (hence the name Aigues-Mortes - "dead seas" - amid salty marshes and lagoons. The French kingdom's first Mediterranean port and the departure point for the Orient and the Crusades.  Famous for salt production, a very valuable commodity as times goes by.

Sommières
Characterful little town on the edge of the garrigue, with ruined feudal chateau, fortified gates and arcaded streets.
Not far is Calvisson which has a great Sunday morning market.

St Guilhem-le-Desert
Charming old village and its abbey, tucked away in a ravine off the Herault gorge. Guilhem, a loyal lieutenant of Charlemagne, discovered the site after fighting battles with the Saracens. Close by is the remarkable Grotte de la Clamouse.

Cirque de Mourèze
Extraordinary 'chaos'; of dolomitic towers and ravines, amongst which nestles a medieval village.

Cap d'Agde
There are two sides to Cap d’Agde the naturists and the Modern beach resort with every kind of water sport; sailing, scuba-diving, shark fishing. The children will love aqualand with its huge water-slides. We have amazing Beachfront Chalets to rent Rochelongue beach is just one of the best in Languedoc.

Valras
A great attraction for kids and well worth a visit for the adults too! Europe's largest Lego Museum - biggest collection built from Lego - including Star Wars, pirates, the port and beach of Valras, the Middle Ages plus there is a play area for you to make your own after your visit.

Minerve
A tiny remote village stuck on a narrow rocky spur between two gorges. Down below, there are natural stone bridges in the bed of the gorge.

The Corbières
Hills are dotted with hill-top forts dating from the 10th century Saracen invasions. They became the last strongholds of the heretic Cathars in the 13th century including Peyrepertuse and Quéribus. There are also many interesting unspoilt villages to visit, notably Lagrasse with its old Abbey.

You may also want to consult our page on 'Getting There'

Other Places to Visit in the Pyrenees-Orientales

We have a great selection of holiday accommodation to rent in this area of the South of France.

Perpignan
Once the seat of the King of Mallorca, today the capital town of the Pyrenees Orientales region  also known as the the French part of Catalonia.

Collioure
A charming little seaside town. Its Majorcan castle rises from the very edge of the water.

Céret
Like Collioure, was a favourite spot with many great modern artists including Picasso and Braque, and there is a surprising Museum of Modern art in the town.

Massif du Canigou
is the first large mountain of the Pyrenees and it dominates the whole coastal plain of Roussillon. At the foot of the mountain is the impressively fortified town of Villefranche-de-Conflent. From here the "Petit Train Jaune"; winds its way up the spectacular Tet valley up to the high Pyrenees. High on the slope of Canigou is a fine Romanseque abbey, St Martin-du-Canigou Abbey.

Vallespir Valley
The fertile valley south of Canigou which leads to the Spanish border. Near its head is the fortified town of

Prats-de-Mollo and the surrounding summits bristling with medieval watchtowers and fortifications.