The villa by night 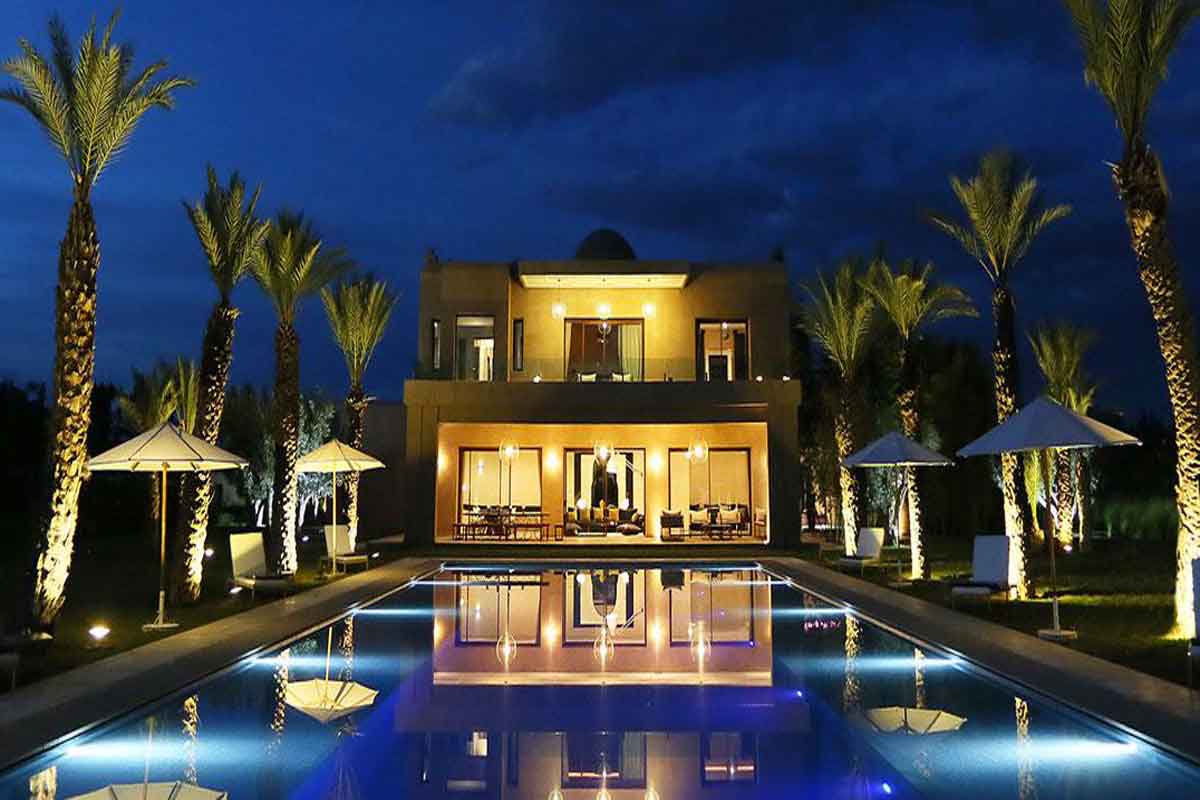 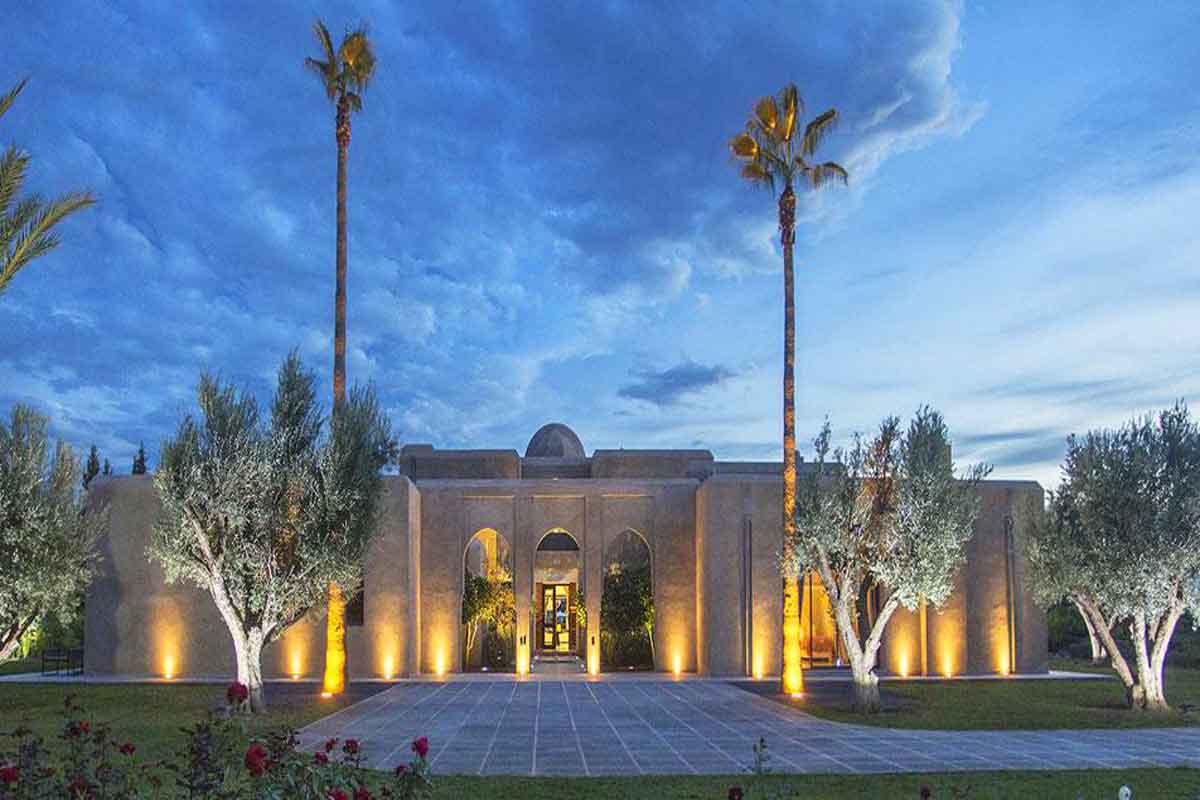 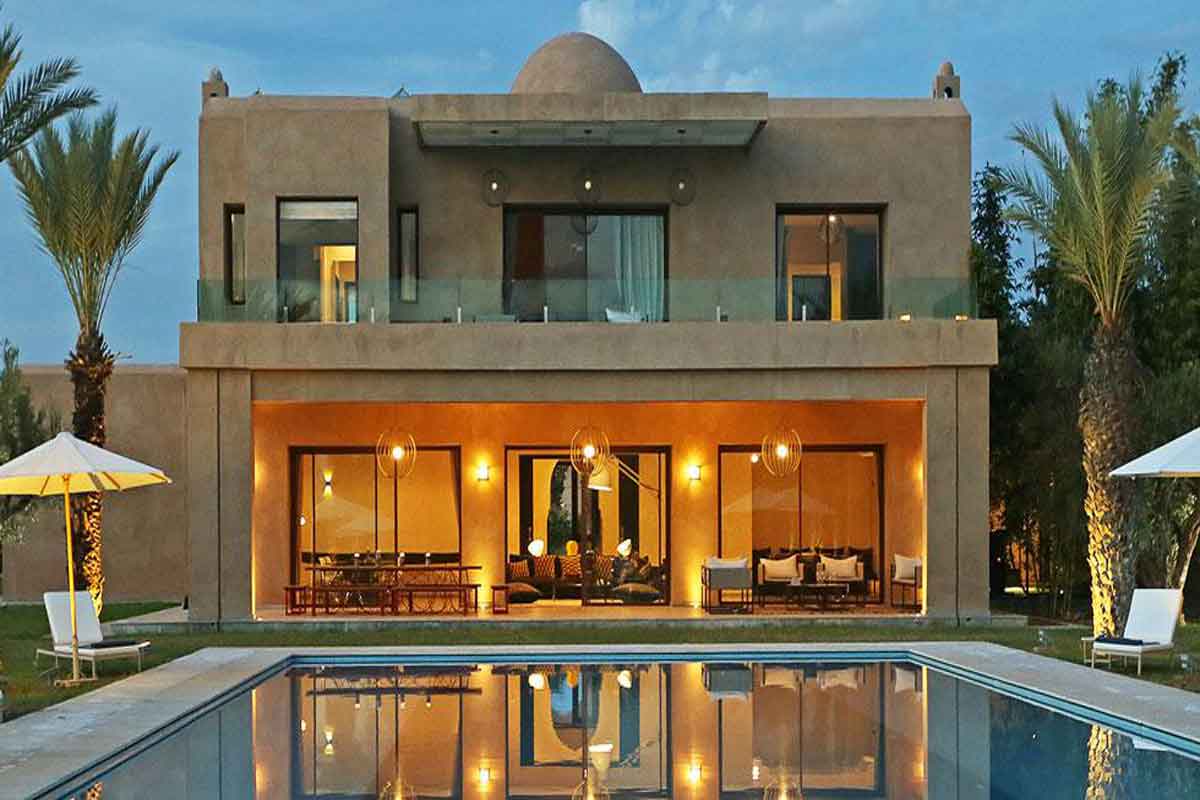 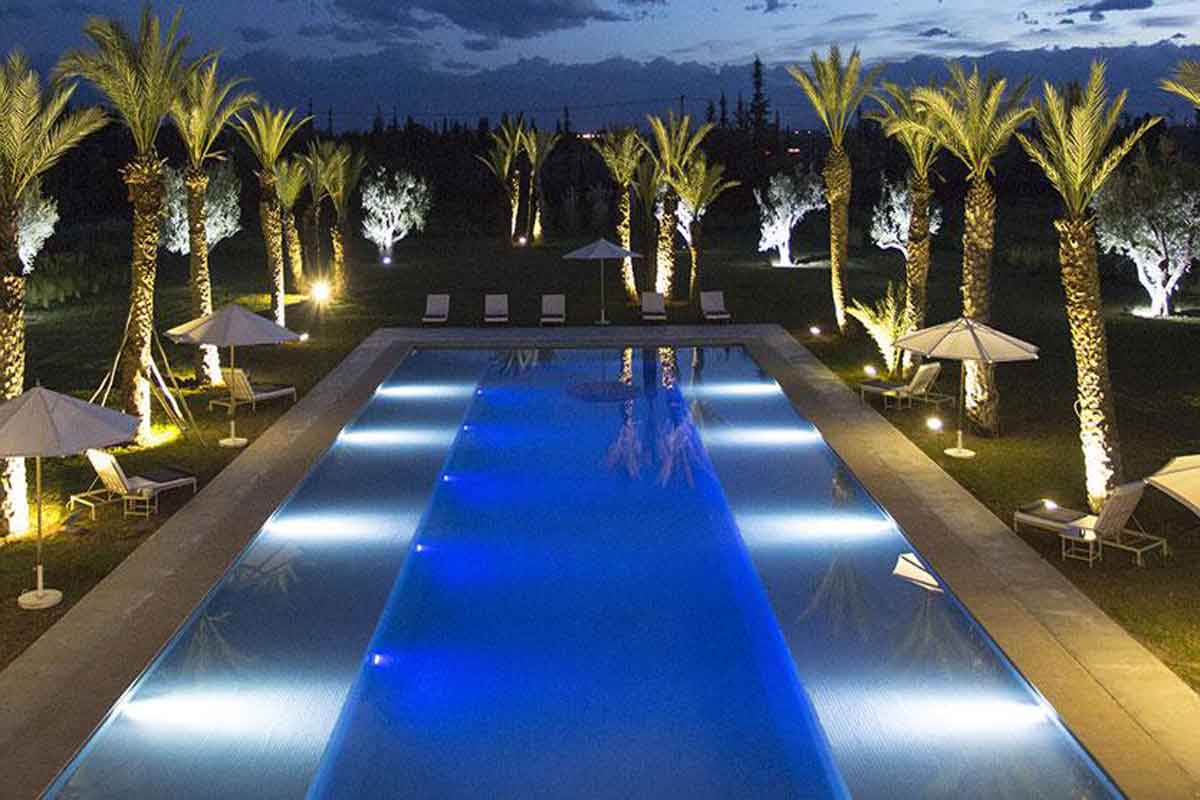 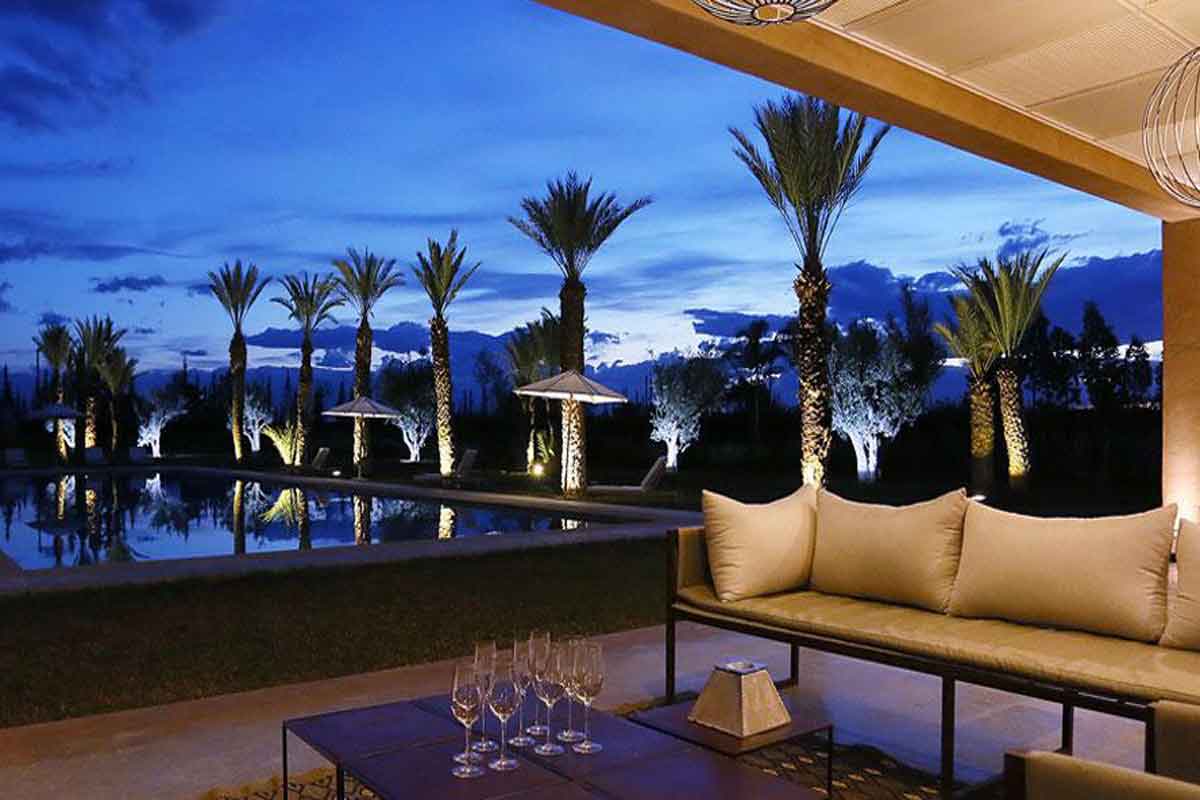 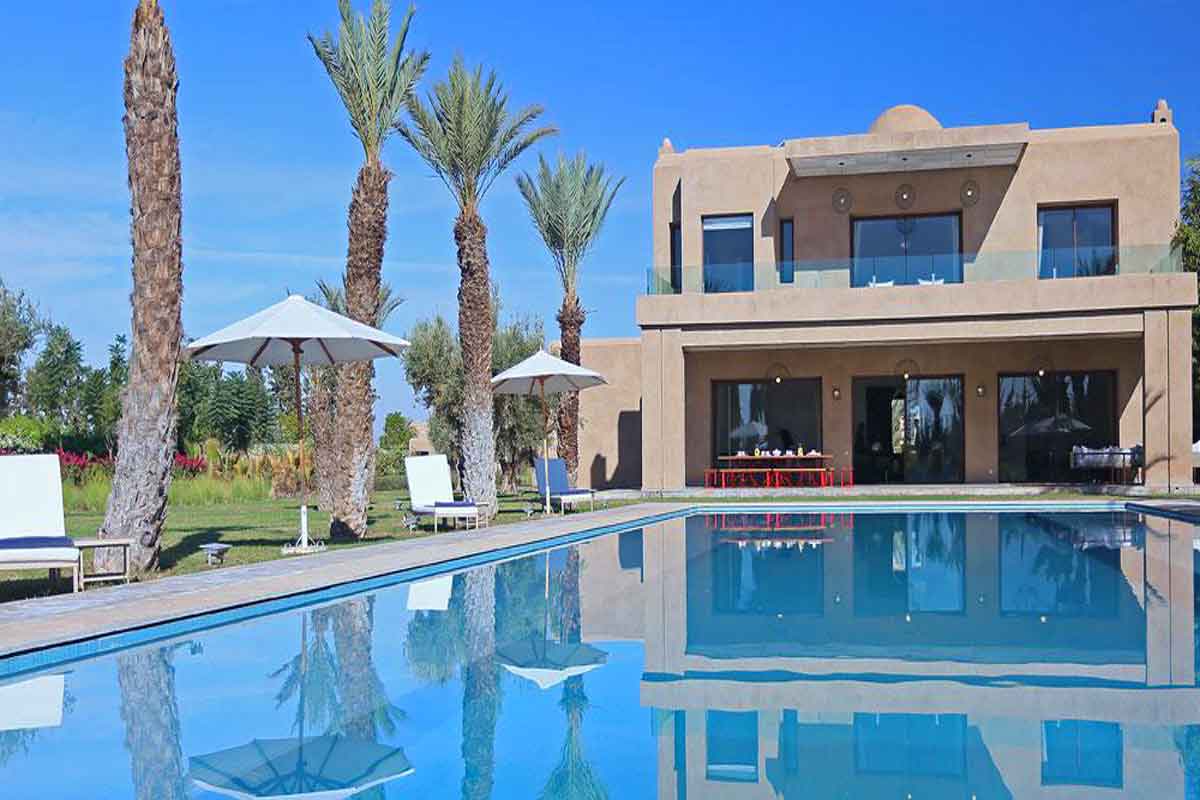 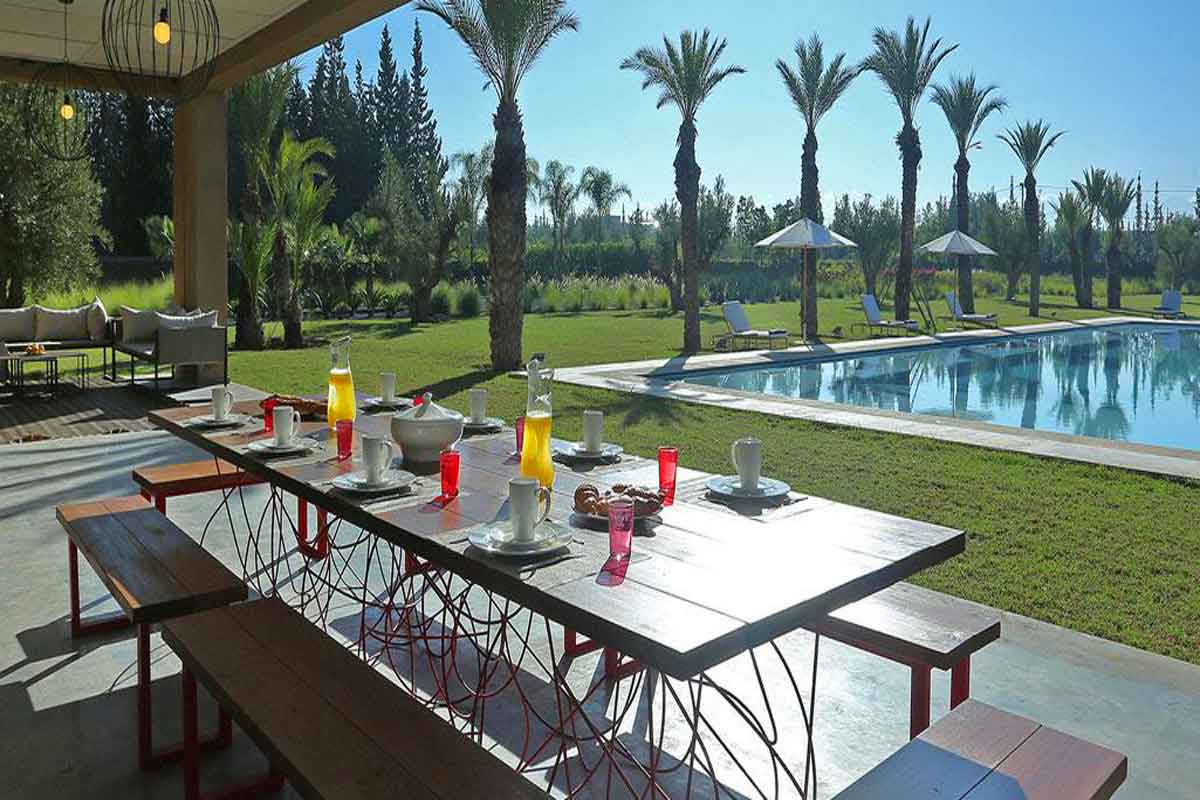 Floor to ceiling windows with views to the pool and garden 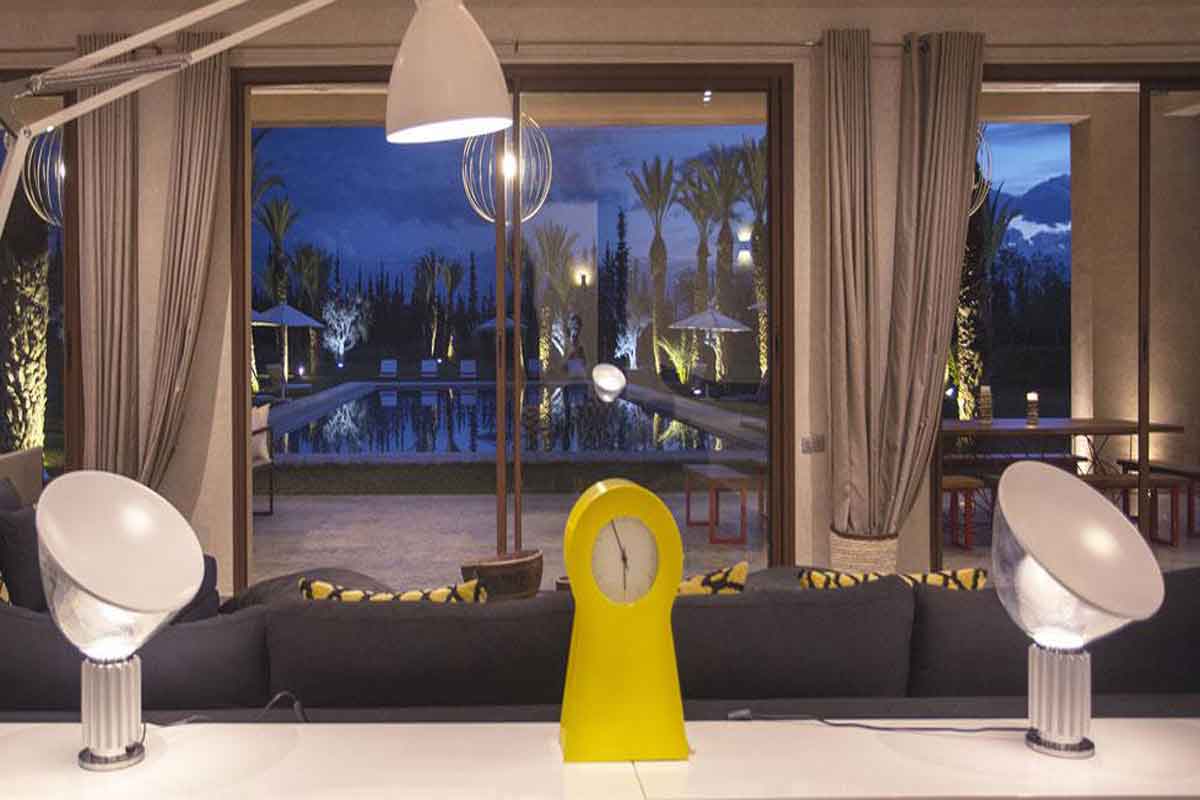 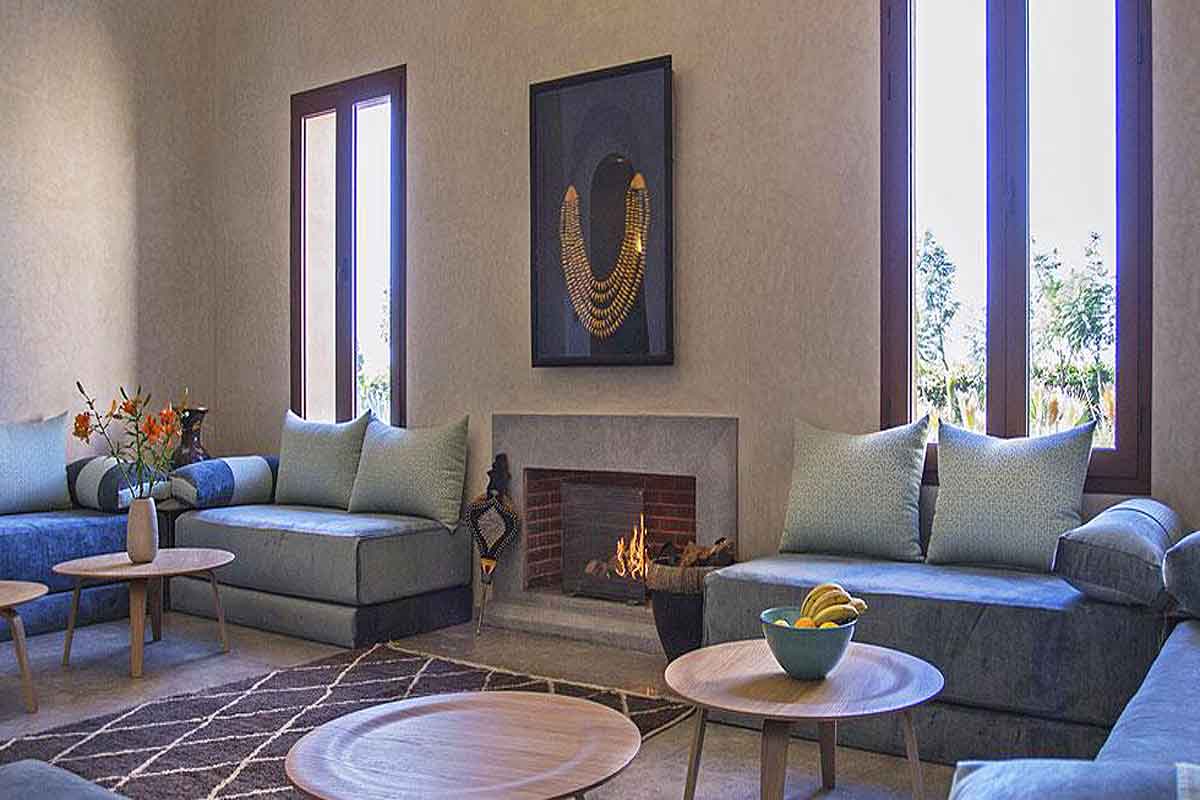 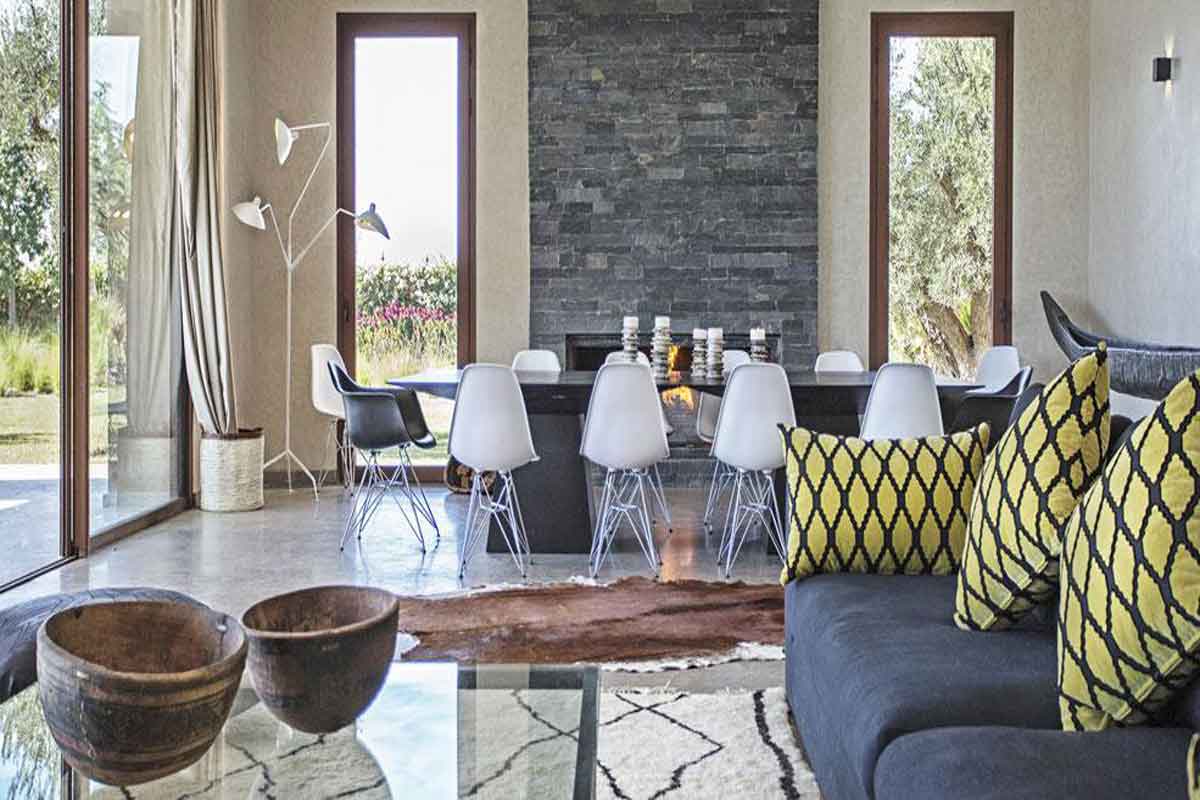 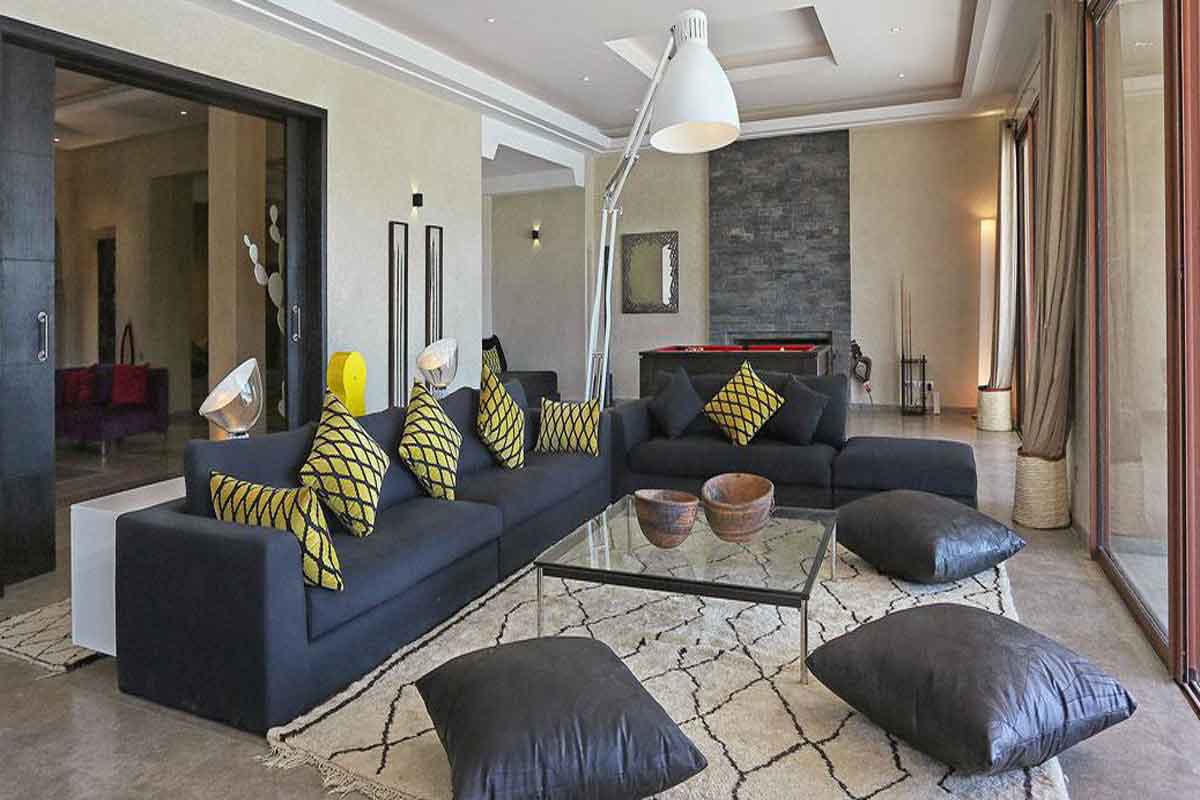 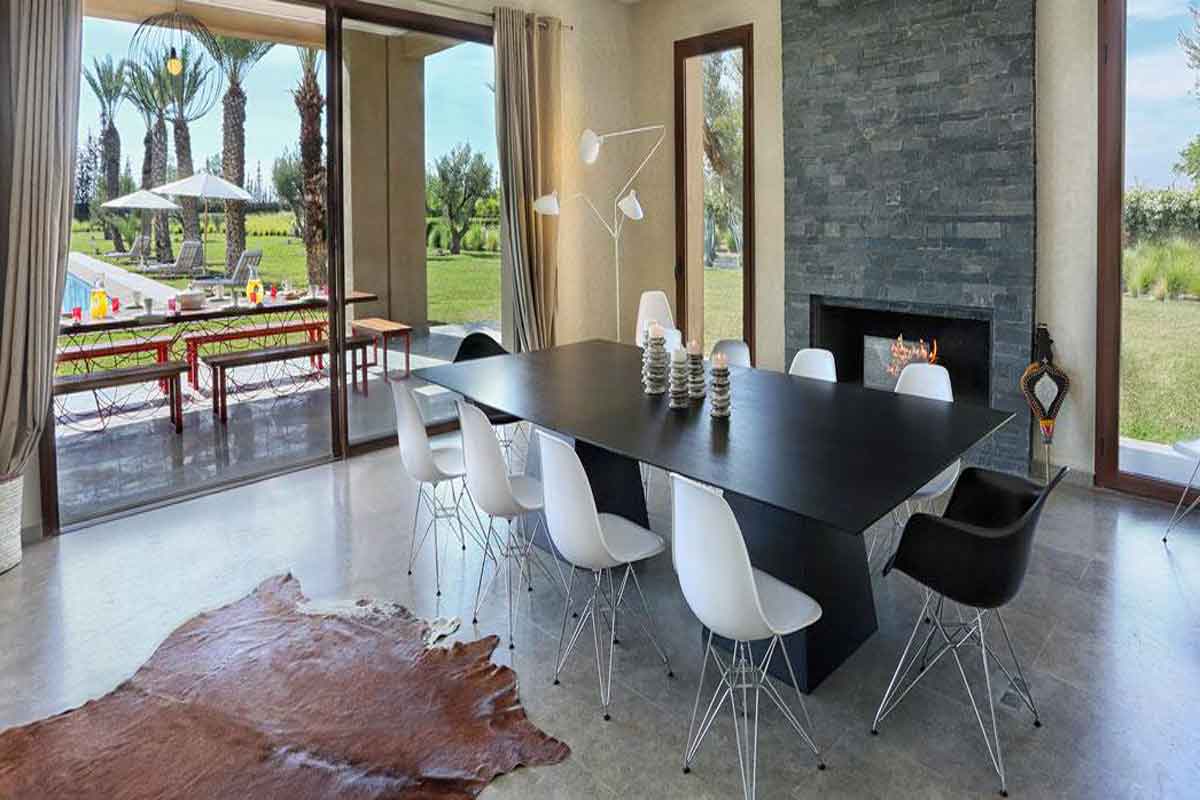 Enjoy alfresco meals on the terrace 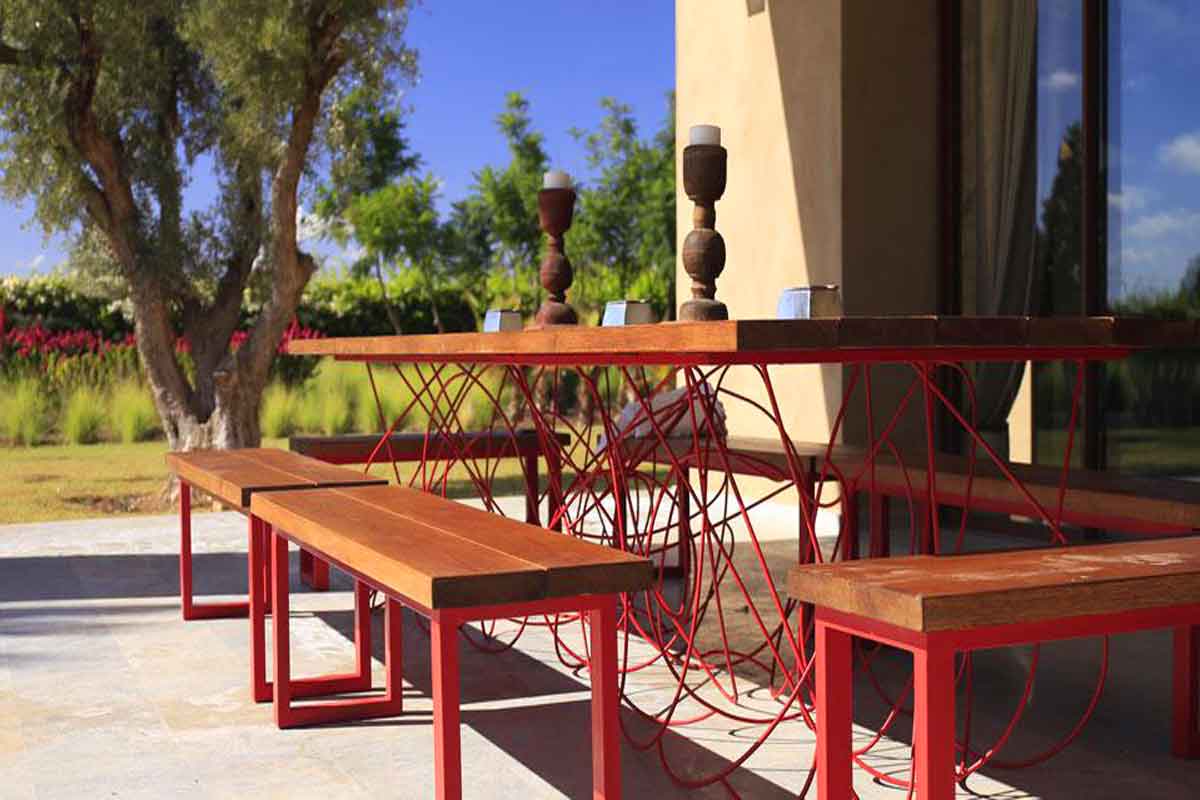 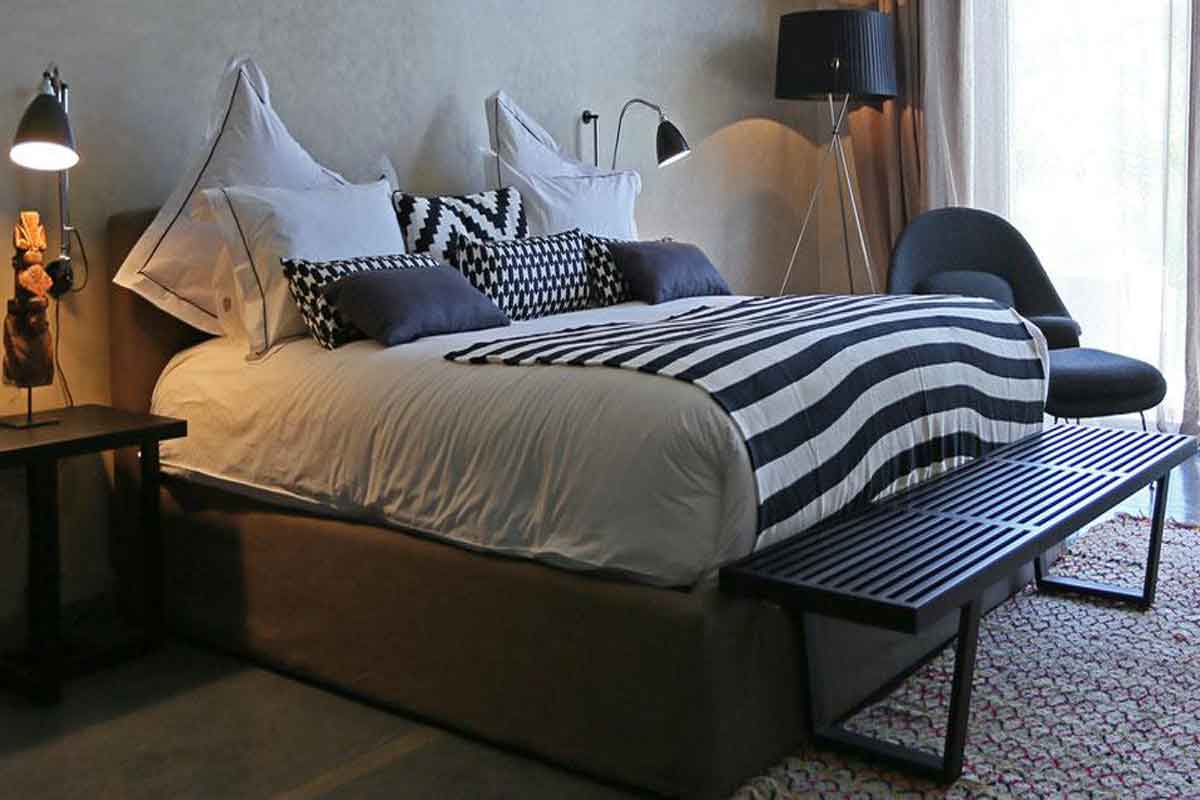 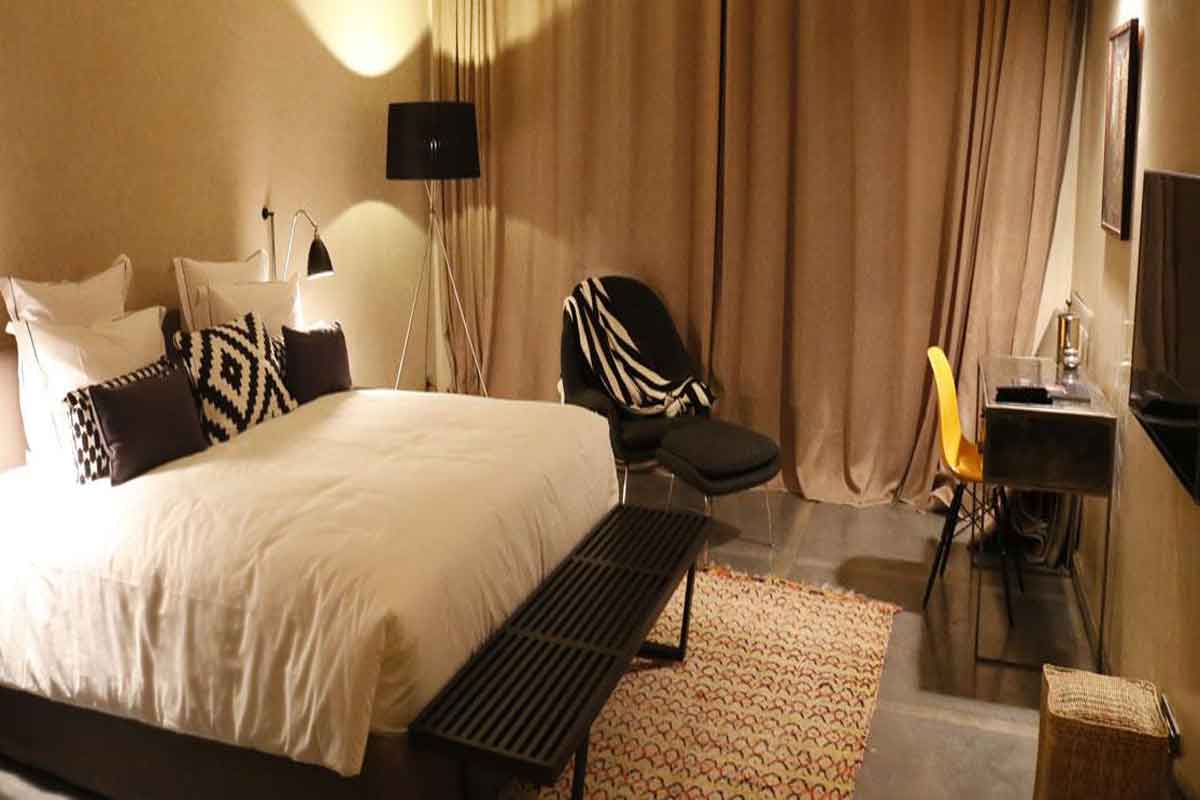 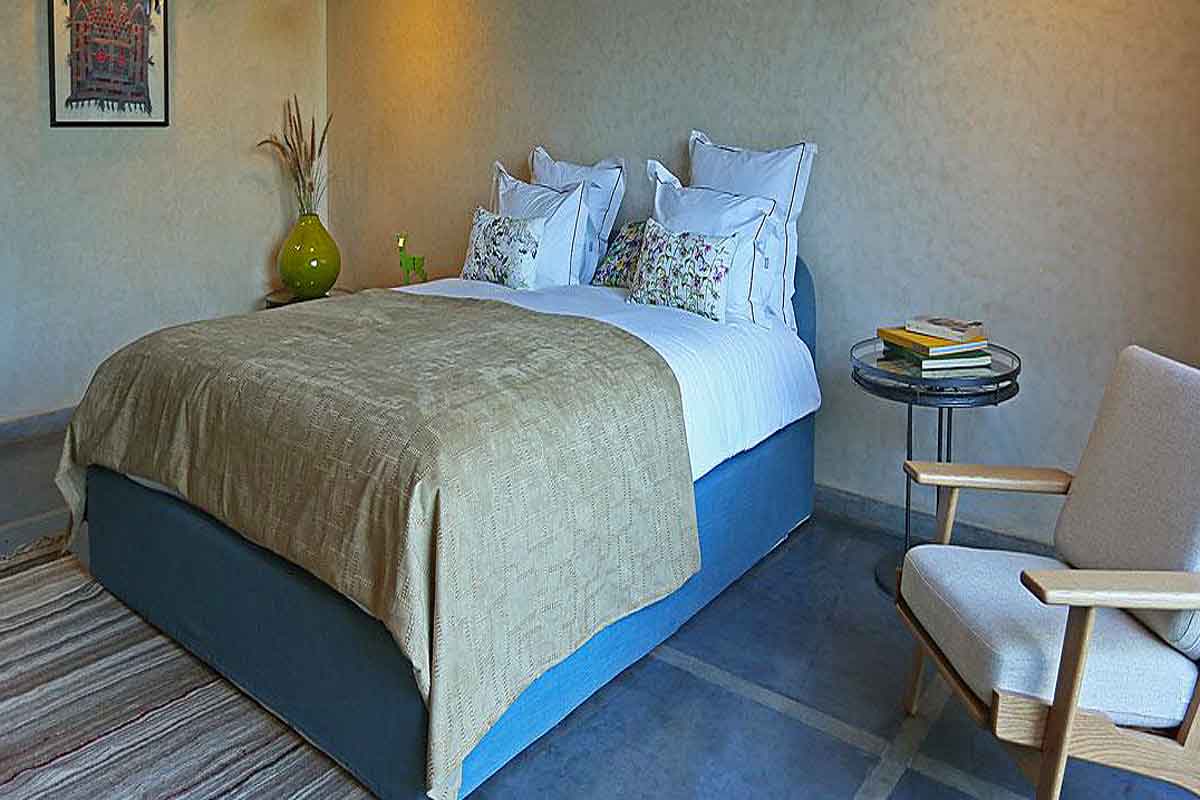 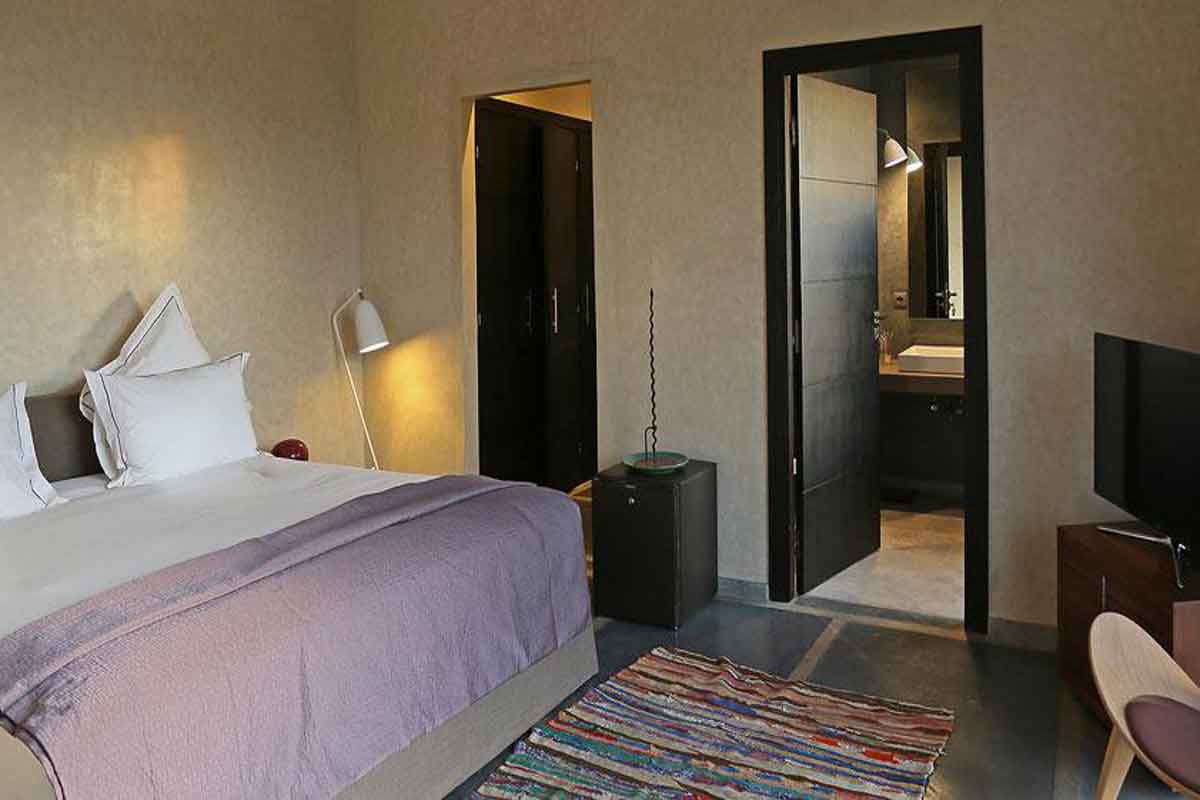 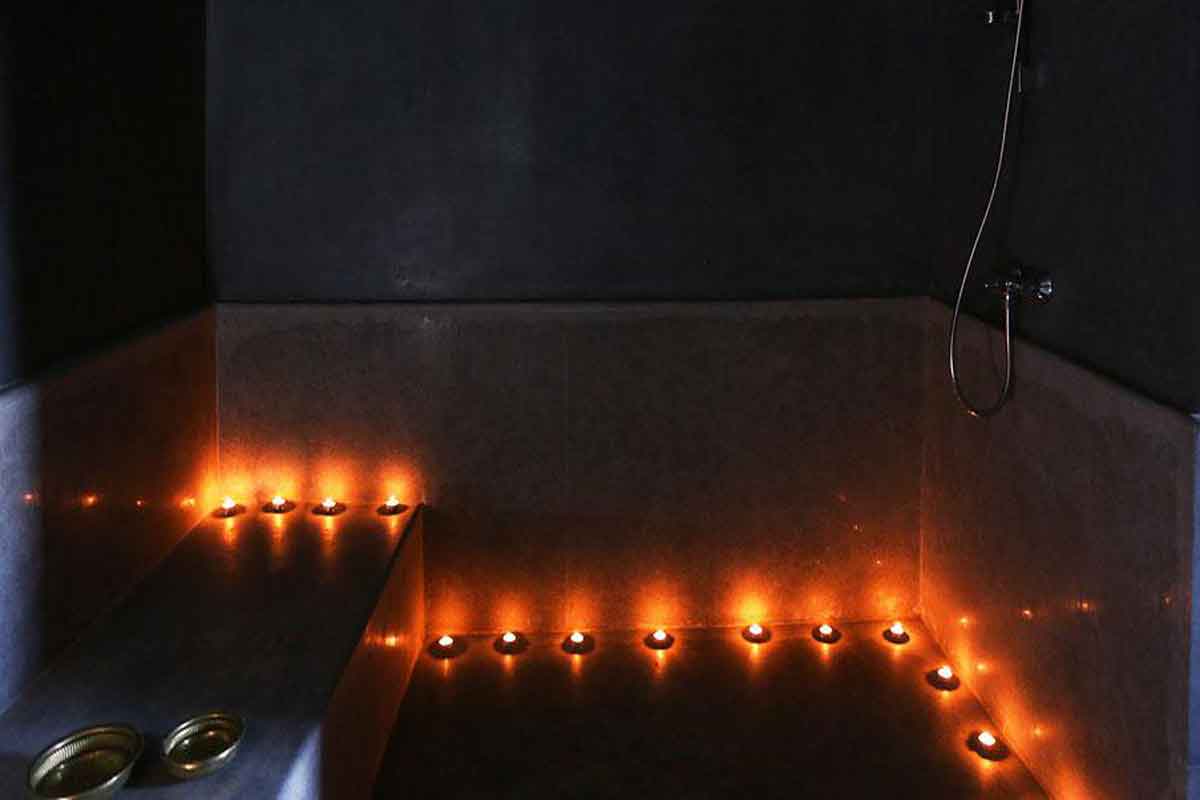 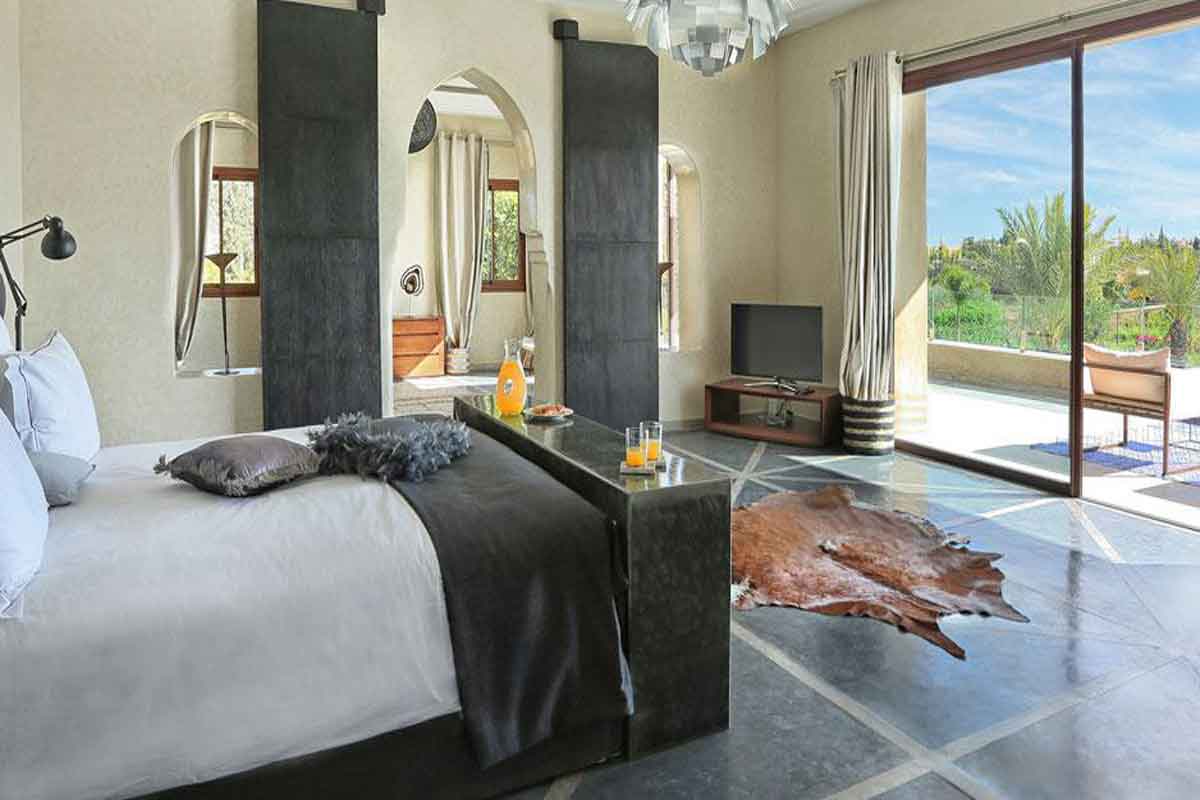 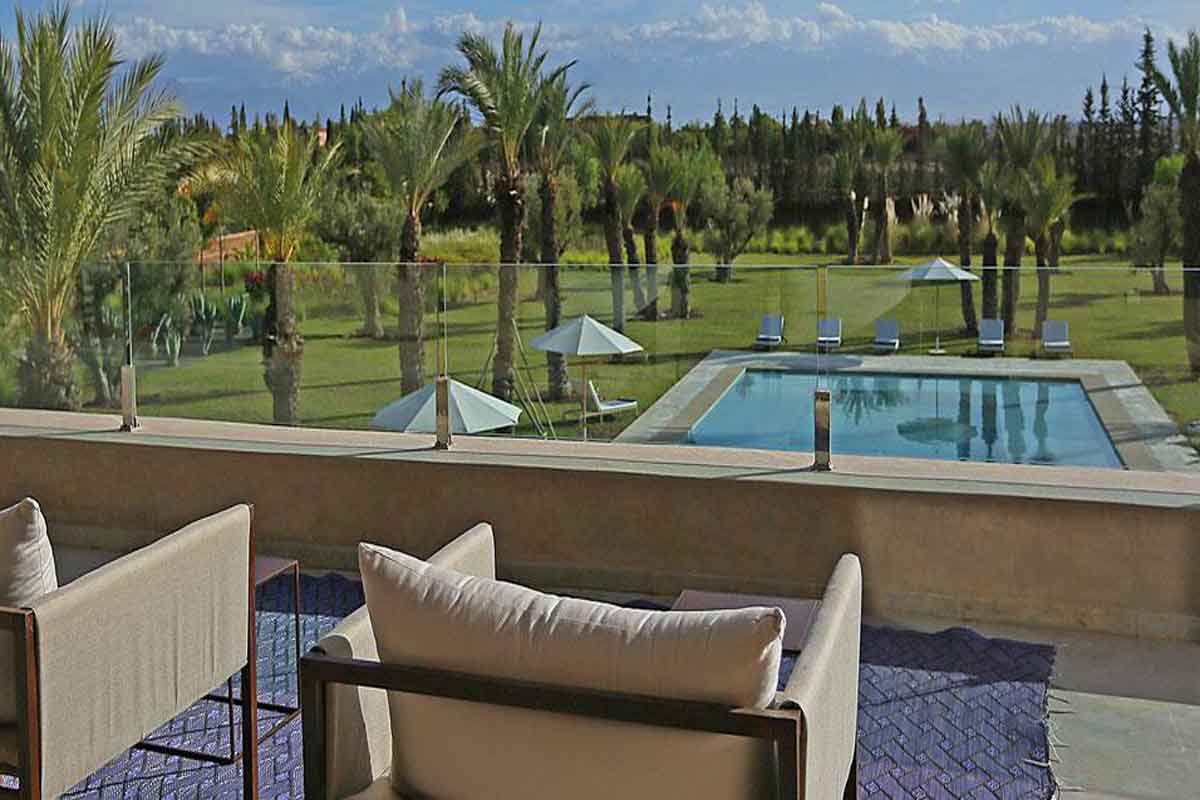 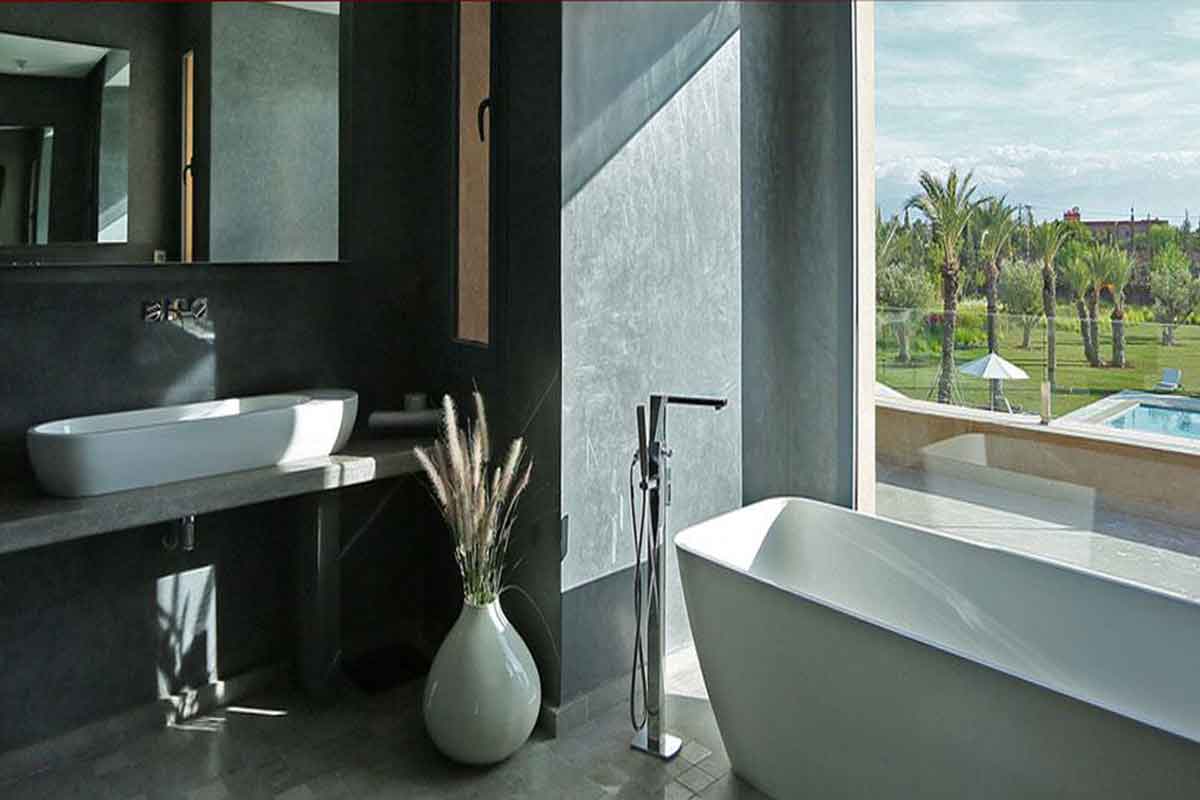 The bathroom and the night sky 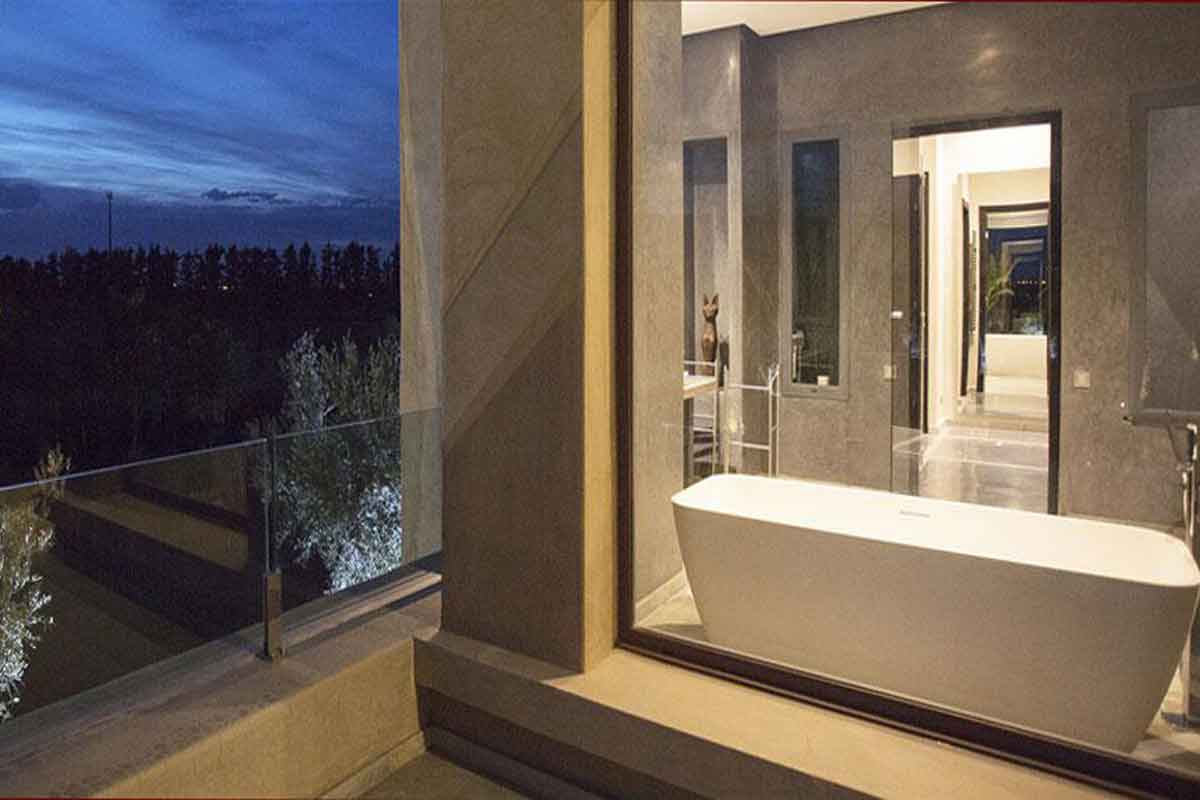 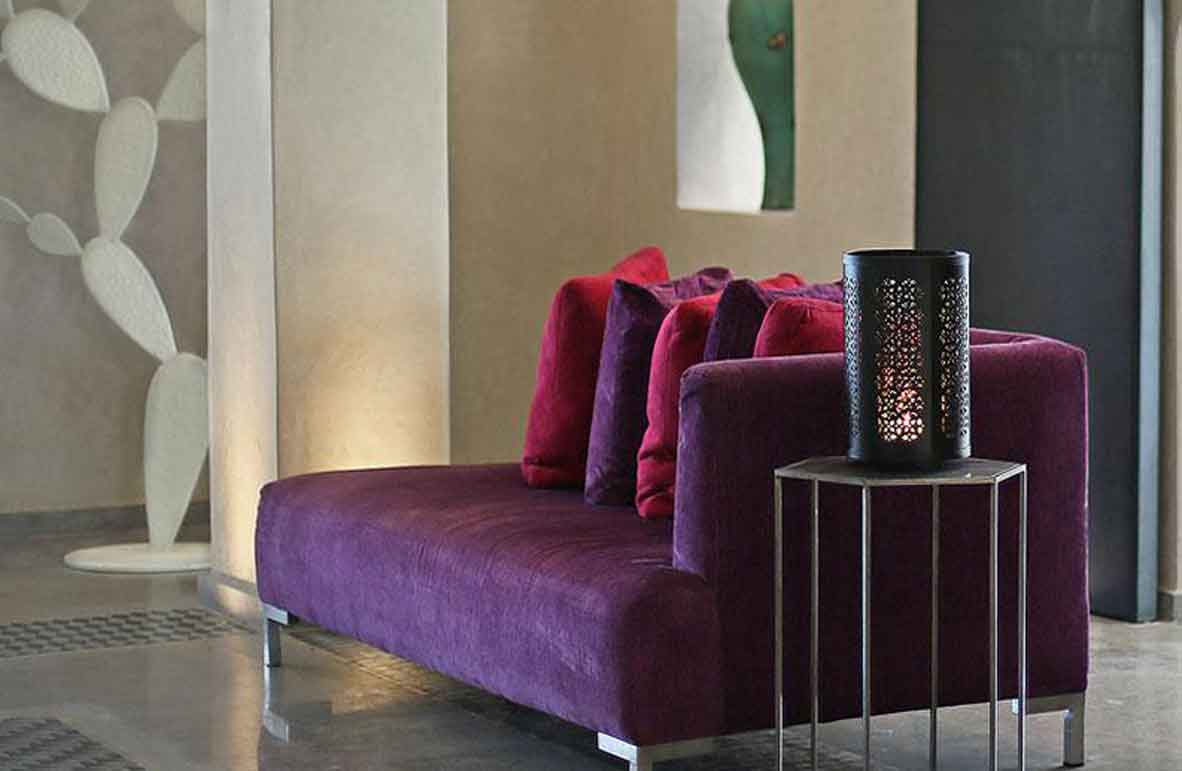 Mix of traditional and modern 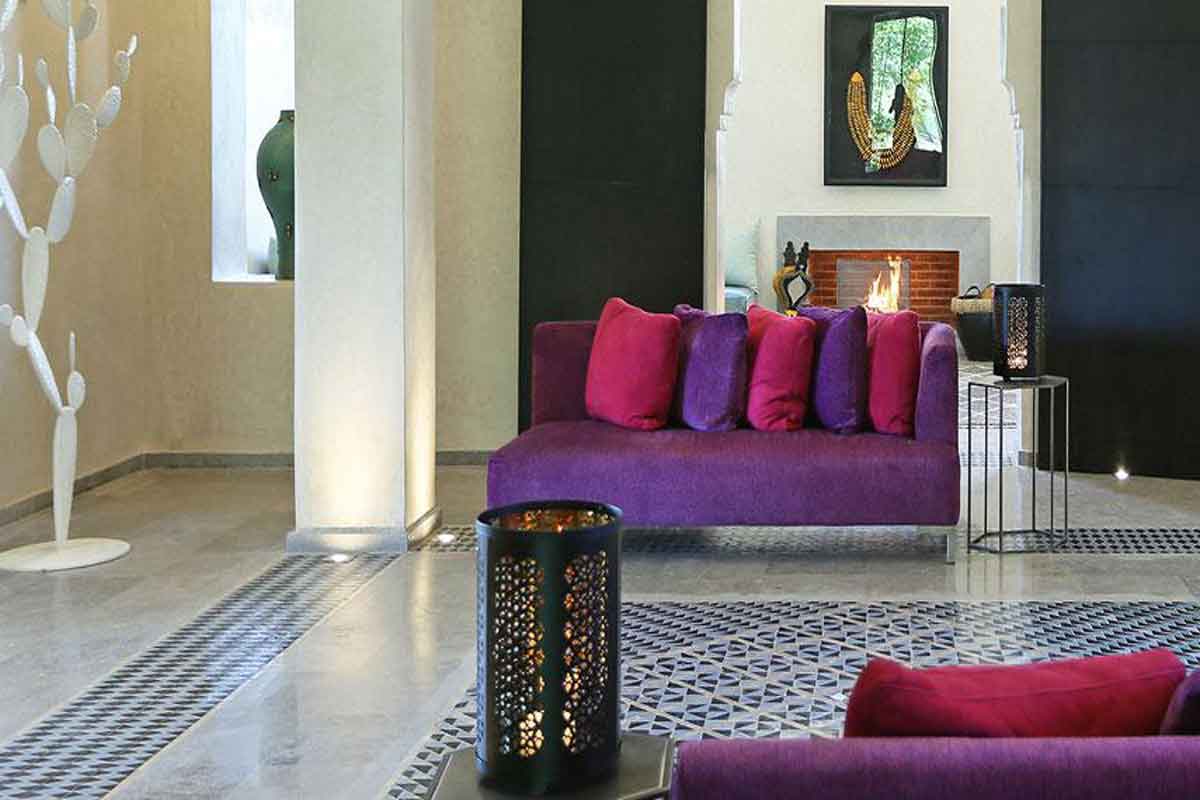 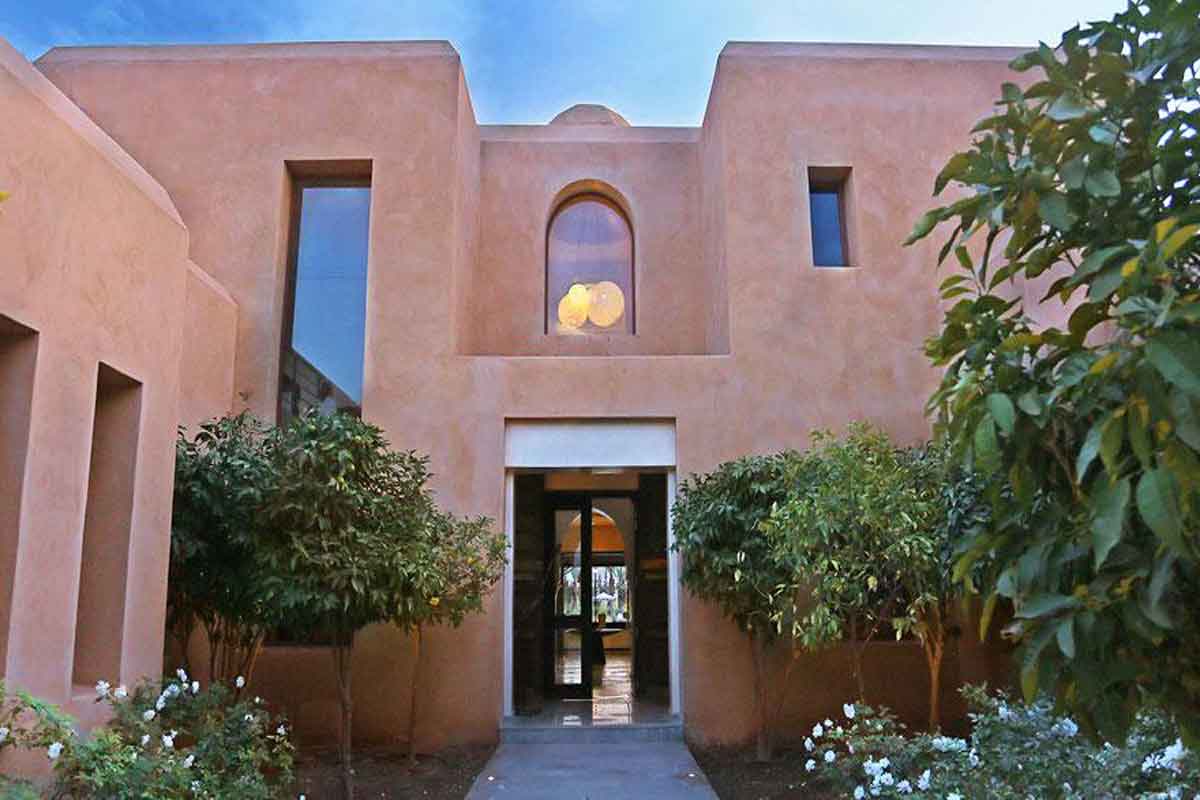 This splendid 7 bedroom holiday villa could be described as absolutely beautiful, subtly sophisticated, truly sumptuous and delicately elegant... so many adjectives to choose from.

Set on a private estate with its own large grounds of 15000m2, this holiday villa offers something for everyone, an impressive outdoor pool, its own private Spa incorporating an indoor heated pool, sauna, hammam and fitness room and a home cinema.

There are 5 en suite bathrooms in the main building and a 200m2 annex in the loft which houses a further 2 bedrooms with shared bathroom.

A great location to relax and unwind in the Moroccan landscape.

The interior of this luxury Moroccan villa was furnished with great elegance by a local interior designer Louise ensuring comfort along with style.

There are two vast lounges, and many sunny terraces overlooking the impressive pool.

The villa offers 5 beautiful bedrooms each with their own private bathrooms - the stunning master suite is worthy of the Arabian nights tale!

Bedrooms 6 and 7 are located in the 200m2 loft annex with shared bathroom.

A home cinema room with giant screen and bose sound system offer an escape from the Moroccan sunshine.

This holiday villa has its own private Spa incorporating an indoor pool, sauna, hammam and fitness room.

The villa is not a self-catering property, the kitchen is for the onsite chef only, you can choose from an all-inclusive or half board option (no alcohol included).

Reputed Chef's can be booked to prepare meals as required (client to advise requirements the night before with all costs settled on departure).

The property has no alcohol licence, however, if guests purchase alcohol at the supermarket, the staff are happy to serve it.

Possibility of hiring a 4x4 for trips out to the desert, the Atlas mountains and other excursions.

Set on a private estate with security, this villa has its own extensive grounds of over a hectare.

The enormous outdoor pool, 30m x 10m is the main feature, surrounded by sunloungers and ample terraces to enjoy the 360° views to the Atlas Mountains - maybe with a chilled glass of champagne.

The holiday villa has its own private Spa incorporating an indoor heated pool of 6m x 3m, with contra flow current, sauna, hammam and fitness room.

For those who want to burn some enegery, there is fitness equipment and a private Tennis Court.

Hot, new nightclubs, catering to the beautiful international set, have arrived, such as Le Comptoir Darna.

The Place Jemaa el-Fna Marrakech is always a little bit of everything: djellabas and babouches, bright colours, energy, heat. Once you've wandered around the stalls, gorged on all the mouthwatering food and watched everything on the square it's time to retreat to one of the many cafes and watch the goings-on from a distance.

In terms of views, though not of food, the best are the rooftop cafes. From here you can see the entire square of Jemaa el-Fna: the smoky and brightly lit food stalls are the centre, but circles of locals form all around the square watching storytellers and actors, and around the edges are the juice stalls selling fresh orange juice.

Marrakech International Airport is Menara - approx 15/20 minutes from the property.

Markets with bakers and grocers, cafes, pharmacies, restaurants and all manner of shops and of course the famous "Souks" are all available in and around the Medina which is 20 minutes' drive from the villa.

Staff are on site - Gardien, Cook/Housekeeper

A 4 x 4 is available for hire (supplementary cost)